Im still in Colera, waiting for my box from Seville. 2 weeks here? Filled with adventure, not for a lifetime? but for now. I tried to send my Moroccan daggers (knives) to the U.S., NOT ALLOWED! I can buy a semi-automatic gun in the U.S. that can be far more destructive than a dagger. So I wait 5 days, then bike to post office, box is still in Seville. They wont send with the daggers. So I sign a paper giving them permission to open box and remove daggers. Thats all that a really want that is in the box, the other stuff is T-shirts and rocks. So another 5 days? Who F__ing knows? Again Im not suffering in Colera, it has been my favorite stop of ALL. But Neil Young is playing in Nimes, France July 17 and I plan on being there box or no box. I bought and was given some ART from Nuria, so the new Box will be BIG.
The north, east, south and west locations have been a mystery to me. I know the sun rises in the east, but where? So I got up before the sunrise, rode my bike to the dock that sits in Colera Bay and waited. 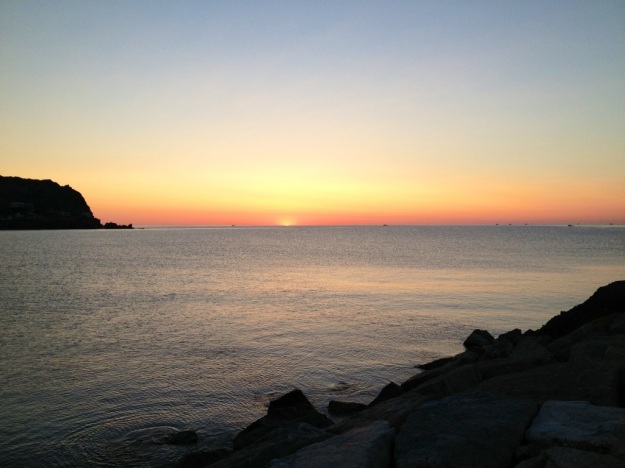 AND HERE IT IS, (from the east)
LLANCA is a fishing village down the road. If you look closely (enlarge), you can see a small fleet of fishing boats commuting to work.
With all these added days here, I`m going down the list of things to do. There are trails through the mountains and along the beach. So I hiked to Llanca, to check on the box and visit the town.

WALKING THE SHORE WAS AWESOME
I know where every hidden cove and nude beach is along this part of the coast.

THERE ARE SO MANY PRIVATE HIDDEN BEACH COVES
Like I`ve said before, I like to give back to the places I visit, not just visit and take. I carry plastic bags with me to recycle for shopping. So I decided to use one for picking up garbage along the beach. I`ve heard about the environmental impact of plastic on MARINE LIFE. 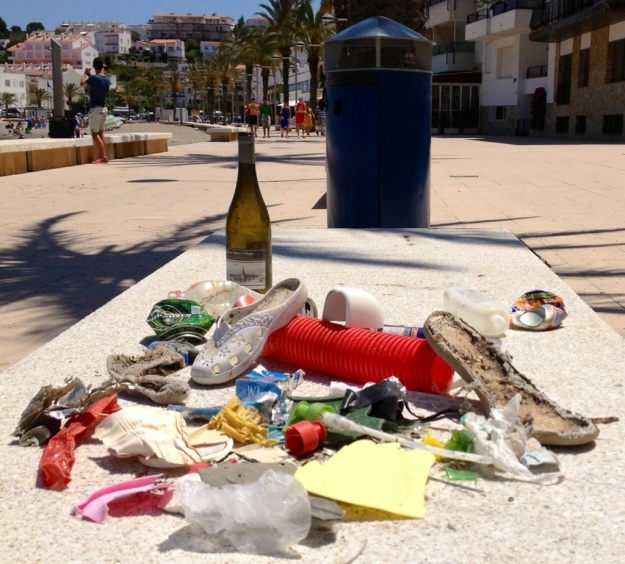 THIS IS WHAT I FOUND DURING MY 2 HOUR HIKE.
I put it in the garbage can in the photo. There was lots of plastics, the planet needs all of us to protect the planet for us and future generations.
So in case your not aware of Siesta? Shops close for 2 to 4 hours in the middle of the day. So basically Llanca was a ghost town.

I decide to hitchhike back to Colera. I`m wearing my TOUR DA FRANCE t-shirt, hoping that helps. 30 minutes and no ride, locals tell me hitchhiking is something that is not practiced here, it`s pretty obvious. Finally a car pulls over I tell them I`m going to Colera, I get in. They were from Paris, maybe 25 years old, they said they saw my shirt and thought I was from Paris, score. The shirt worked, when I told them I was from America I got a ride right to the camground. 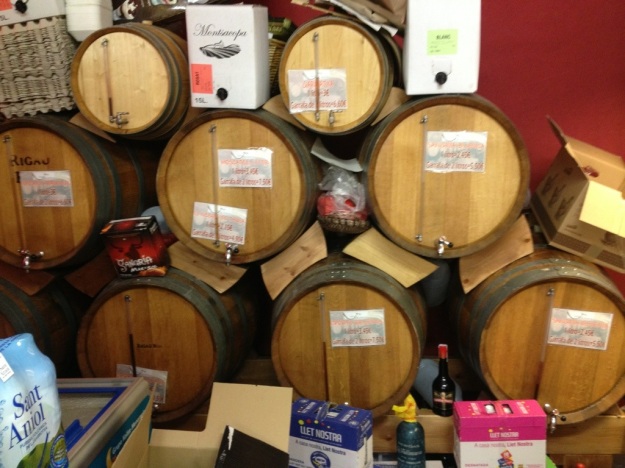 THE SHOP SELLS BULK OLIVE OIL TOO!
One of the best things about bike touring is having a bicycle to explore the local areas. I asked the people who work here and live in Llanca if they had ever biked to work?, none had. I decided to bike, it took 20 minutes. They told me it took 10 minutes to drive. Again, I showed up in Llanca during siesta, everything was closed, again. I wanted to try the train to go back to Colera. They basically have a MAX (my home town commuter train name) that serves a community of less than 600 people. (more about this later in my Spain summary post).
So I bike to Llanca, EARLY, I want to visit the shops, when their OPEN! My front wheel is shaking, I don`t know what is causing it?
I`m getting frustrated about this box thing. I decide to bike to PORTBOU because when I finally leave here I intend to ride straight to France. I`m climbing a hill and my tire comes off the rim, the tube wraps around the quick release and I go down flipping over the handle bars. Thankfully I wasn`t going downhill, fast, it would have been ugly. But as I lay on the pavement in a heap the reality of traveling alone, comes to light. I have to be so careful, it could get ugly in a split second. While trying to repair the problem, 3 sets of touring cyclist came by.

SHE OWNS GEPETTO VELOS IN PARIS

THIS COUPLE WAS FROM SCOTLAND 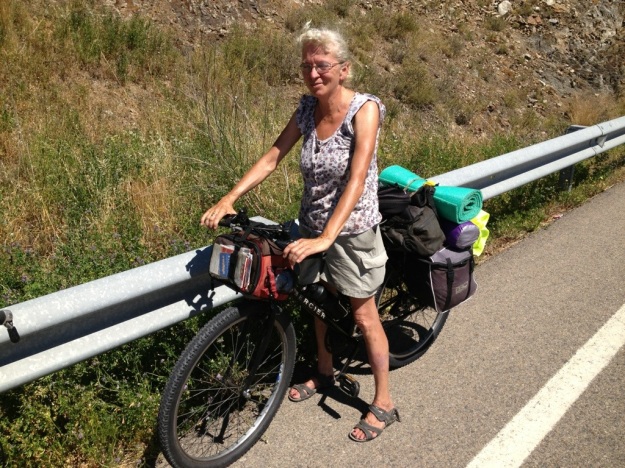 It is so great to see other cyclist enjoying some of the most beautiful riding I`ve ever done.
Back to the tire repair~so I spent an hour and a half messing around with the tire. I`m half way to Portbou, so I decide to walk the rest of the way to town. I photographed the train schedule and have used it several times. I decide to take the train to FIGUERES since google maps says there are 4 bike shops there. Guess what? Yep It`s siesta time, the town is half closed and so are all 4 bike shops. I`ve got 3 hours to kill, so I look for the SALVADOR DALI MUSEUM. 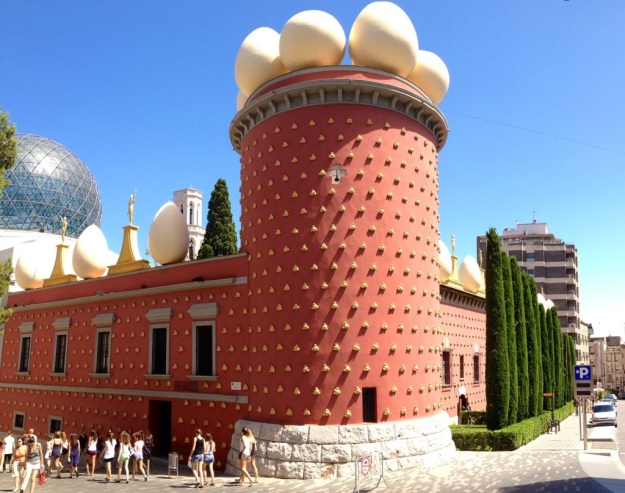 The egg is a Dalinian image that symbolises hope and love. Holding an egg (a favourite Dalinian symbol representing duality of hard exterior and soft interior, and links with pre-natal imagery) that here could represent reproduction, the sexual drive, or life instinct.”
There was a long line to get in so I just visited the many souvenir shops. I think one of the most interesting aspects of Dali`s art is his PHILOSOPHICAL thoughts on life and art.
I head back to the train station and retrieve my bike. The bike shop tries to tell me it just needs some air. I explain that the tire won`t seat properly and comes off the rim. He tries ro fill the tire with air and sees what I`m trying to tell him. New Shwalbe tire, AWESOME. I swap my front and back tires so they wear evenly, I just did it. So back at camp I swap my new tire to the back, so now the tires should wear out at the same time. That helps maximize your tires potential longevity. I cleaned my chain using my old tooth brush and camp suds soap then hosed it off.
I ran into this French traveller who was doing a similar trip to mine, but with a scooter.

THIS IS NICKOLIS (check out the Bob Marley sticker)
Till next time, be sure to ride your bike as much as you can (while you can!)
Jeff

2 thoughts on “COLERA, THE BOX & THE FIRST CRASH”