I biked in the Czech Republic a couple years ago and thought it had some of the best signed & nearly carfree bicycle touring.  I tried to go this summer (2018), but there was too much stuff going on.  After volunteering at the Botanical Garden, I checked the weather in Prague, sunny for at least a week.  I was on the train the next day heading north to Prague with my bike.
END_OF_DOCUMENT_TOKEN_TO_BE_REPLACED

i stopped by several different tourist offices, to try and figure out how to get on the Prague-Vienna bike path.  She said you need to take bike route 12.  We ride out of town and see a bike sign 12A and start following it. 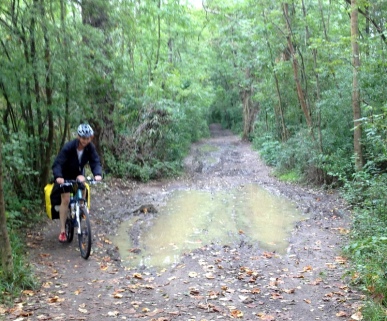 The routes are well marked, but you need to know the difference between 12a and 12.  We rode until we were finally convinced that we were following the wrong route 12. 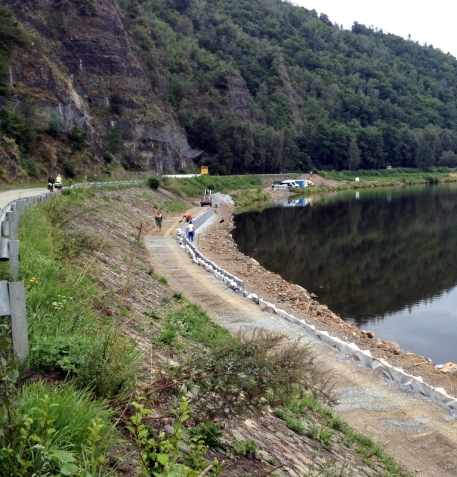 CZECH IS STILL ACTIVELY BUILDING NEW BIKE ROUTES, LIKE THIS ONE ALONG THE RIVER.  THAT’S NATASA AND SARA ON THEIR BIKES

We thankfully bought a bike map at the tourist office and tested our navigation skills.  There are so many options, your never really totally lost.

EVEN OUR RE-ROUTE WAS BEAUTIFUL AND NEARLY CAR-FREE

I WAS SO HAPPY

We probably road 45km, at the end of the day we saw a sign to Prague 19km.  I was hoping Natasa wouldn’t see the sign, but she did and was dead tired.  She wanted a hotel, no camping.  I asked the local policeman where there was a hotel, he drew me a map.  Were in a really non-tourist town of  Jílové u Prahy (photos google street map). The next day we ride to Sedlčan (photos google street map).  The weather is looking grim, we opt for a train ride to Tabor. 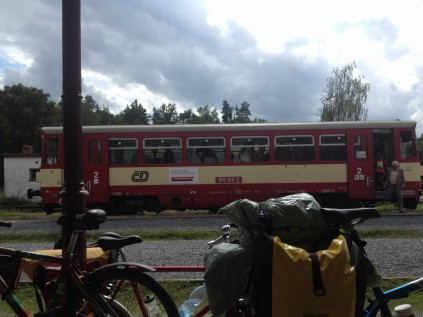 OUR BIKES ARE GOING ON THAT? YES

The train that picked us up looked like a big bus. It was the cabin and engine all in one.  We had to change trains, while waiting under the shelter it started pouring rain, I was glad to be taking the train.  Were in TABOR (photo tour) the sister city to our home of Skofja Loka.  Czech’s largest chocolate museum is in Tabor, OK we’ll go.

OUR CHOCOLATE “TEACHER” WAS SUPER HELPFUL AND HAD ENOUGH ENGLISH TO HAVE SOME GOOD LAUGHS TOGETHER. 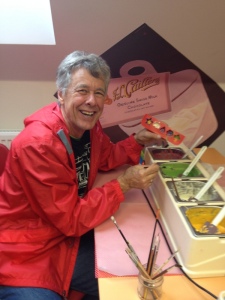 THERE WERE MANY COLOR OPTIONS AVAILABLE

THE CASTLE TOWER VIEW OF TABOR

i love taking photos of art and this one was pretty special.

THE BAROQUE STYLE BUILDINGS WERE BEAUTIFUL IN TABOR

We’re happy to be back on the road and the biking here is some of the best I’ve ever done.

THE ROAD SPLIT THE LAKE 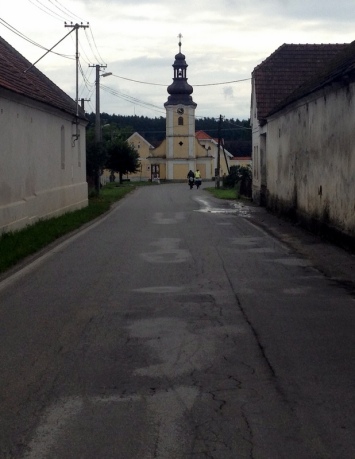 RIDING THROUGH THESE VILLAGES IS REALLY SPECIAL AND AGAIN NEARLY CAR FREE!

This is mainly a bike touring route, but lots of cyclist enjoy the low traffic backroads.

MOST OF THE ROADS WERE IN GREAT CONDITION, THIS ONE WAS BRAND NEW.

ONE OF THE MANY RELIGIOUS MONUMENTS, IN THE MIDDLE OF NOWHERE

Were following the Prague-Vienna bike route, but we missed a sign and end up on another bike route. 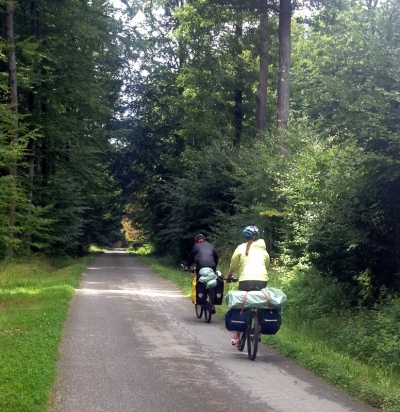 This is the last night where we could camp.  We’ve been carrying our tents, sleeping bags and pads, but haven’t used them yet.  I wanted to camp, but the vote was 2-1. 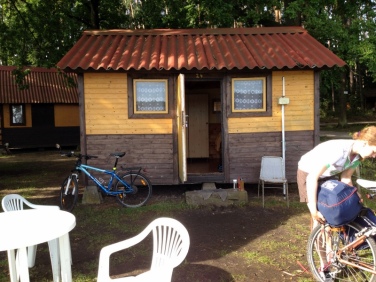 THIS WAS OUR LAKE SIDE CABIN, IT’S REALLY COZY

The State Chateau of Hluboká

Were in the town of Hluboka, it has a CASTLE (photos).  Were here and were going to visit it.  What an amazing place.  We weren’t allowed to take photos inside.  The place was amazing, the intricate carvings in every room were flawless.  The carvings around a mirror took 3 people 17 months, it was absolutely perfect.  There were so many photo opportunities, but no.  I look at the souvenir photo book, not the pictures I would have chosen, I don’t buy it.  Now I wish I had taken some clandestin photos.  Here’s a link to some INTERIOR CASTLE PHOTOS

THIS IS A PHOTO OF THE TYPICAL CZECH BIKE PATH

I HAVE SOME MORE BRIDGE PHOTOS IN MY PHOTO ALBUM

It’s our last day on the bike, were almost back to Cesky Krumlov.

IT’S HARD TO BELIEVE THAT THE LAST 3 OR 4 KM OF THE BIKE PATH IS GRAVEL. IT’S STILL BEAUTIFUL WITH NO CARS. 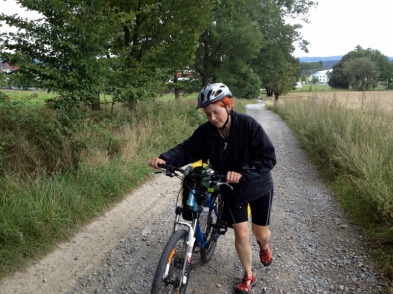 BUT, THIS UPHILL PART OF THE RIDE WASN’T VERY POPULAR WITH ANYONE

Were back at the Havana Hostel and our host is recommending the The 2 Marys Restaurant.  Holy Shit, REAL Czech food is awesomely healthy.  Read the history of Czech food. 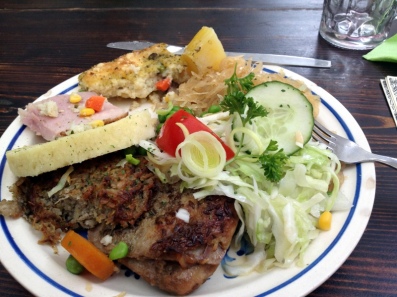 We stop at a market on our drive back and there’s some touring cyclist from Czech. 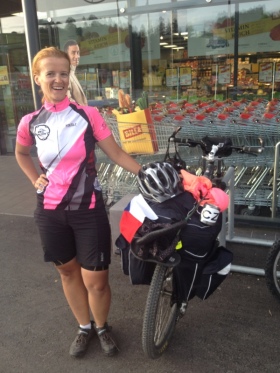 SHE PROUDLY POSES WHILE FLYING THE CZECH FLAG AND HAS A CAR CZ STICKER ON HER COFFEE MUG. LOVE IT.

We decide to take the whole day to drive back.  We stop in Linz, Austria and buy this cute garden sculpture for our garden.

Then to IKEA, for some shopping.  Some parts of Europe are just like America and IKEA is just that.  We must pass through 12 or more tunnels and there are these signs inside. 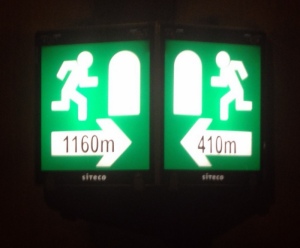 WHICH WAY SHOULD I GO?

All and all It was a another successful tour, got lost a few times but no injury accidents.  Were home safe and sound in Skofja Loka.  I’m working on a story about life in Skofja Loka.  They have been remodeling the whole town, laying new cobblestone.  I’ve got lots of fun pictures. 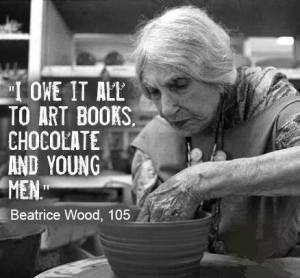 I’ve been super busy, we just got back from our Czech bike tour then I left for the Euro-Bike Expo in Friedrichshafen, Germany. I wanted to see the latest in E-Bike technology.  I think the future in transportation is going to be the combination of a bicycle with electric assist.  There was talk of changing the expo name to The E-Bike Show.  E-bikes dominated, the show, both in number of booths and the test area was packed too. I’ll post some photos from the bike show, after this story.

I thought Czech was some of the best available bike touring I’ve done to date. I didn’t look at this map before we left, here’s the opencyclemap.org, a free to access  bicycle map, mostly for Europe.  I was shocked when I saw the multiple route options that I could explore the Czech Republic with a  bicycle.  Many of the routes were signed and there were good bike maps available at most tourist offices. 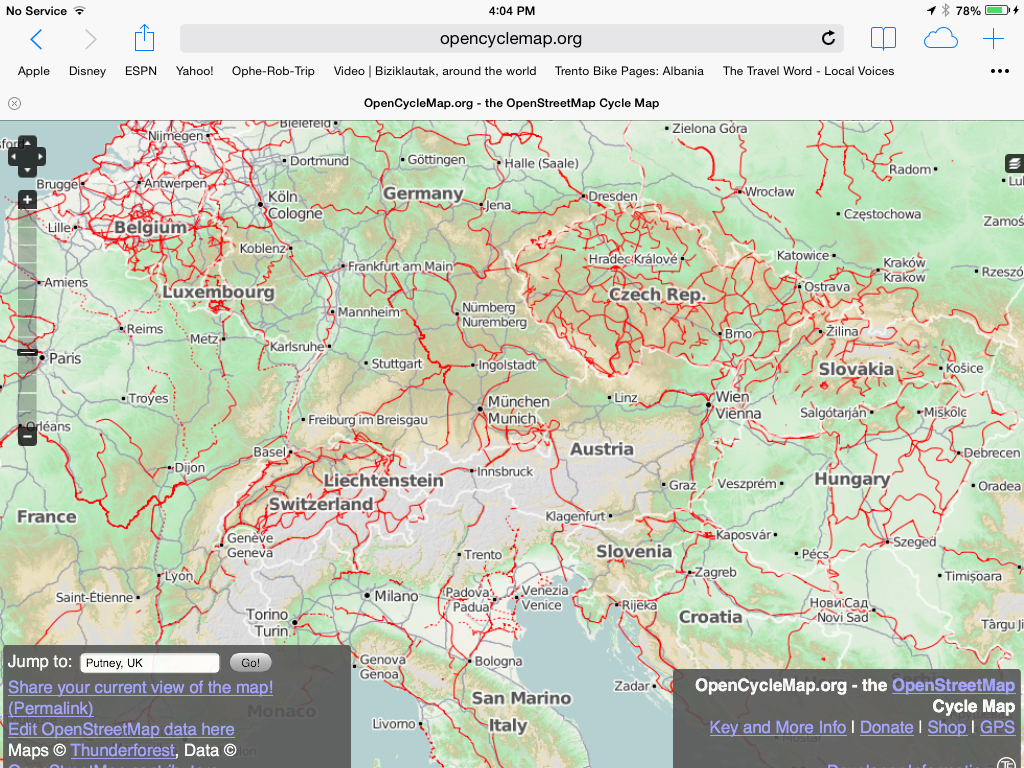 CZECH COMPETES WELL WITH THE NETHERLANDS FOR BIKING OPPORTUNITIES

We wanted to take the train to be car-free, but no, that was a 14 hour adventure with 3 train changes.  It’s only a 5 hour drive, that saves almost 2 days of travel and vacation time. 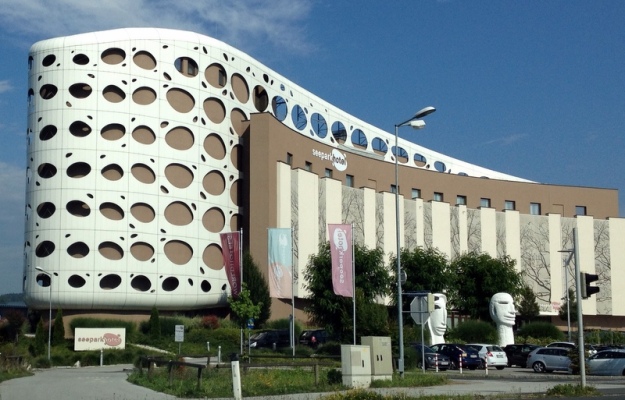 NATASA WANTED TO DRIVE, SO I GET TO TAKE PHOTOS

We drive to   CESKY KRUMLOV (photos). to start our bicycle tour.

We stay at the HAVANA HOSTEL, in Cesky Krumlov it was clean, cheap, very friendly and informative.

OUR BAGS BLOW-UP AT THE HOSTEL

IT WAS A NICE “CAR-FREE” VILLAGE TO WALK AROUND

The town was super cool, with the river s-ing it’s way through town, full of rafters, it was quite entertaining.  It seems every town has a tower to climb and Cesky Krumlov had one too.

WE VISIT THE TOWER FIRST, TO GET A BIRDS EYE VIEW OF THE CITIES LAYOUT.

A SELFIE SHOT BY SOMEONE ELSE

We spend the day visiting museums and galleries.

HUNTING WAS A HUGE SPORT, BACK IN THE DAY. MANY CASTLES ARE DECORATED WITH ELK & DEER ANTLERS

IT’S NOT RAINING, YET

The tourist office can’t tell me where the bike trail starts, so I head out on my own to find it.  I always find something interesting when I’m exploring on my own.  I finally find the start of the bike trail.

NO GUNS, DRUGS, TIES OR RUSSIA!

it starts raining and that includes the forecast, but Prague is dry.  Our original plan was to ride from Cesky Krumlov to Prague, but after we evaluated the weather situation, we flipped the ride around.  We now plan to take the train to Prague and bike back to Cesky Krumlov, where the car is parked.

We start off by getting on the wrong train going the wrong way.  We can get upset, but what’s the point?  We just sit back and enjoy the ride. by now it’s pouring rain outside and a train ride is much better than a bike ride, in the rain.  In Prague we meet a German couple at the train station and they follow us into the Old Town Square of Prague (photos). 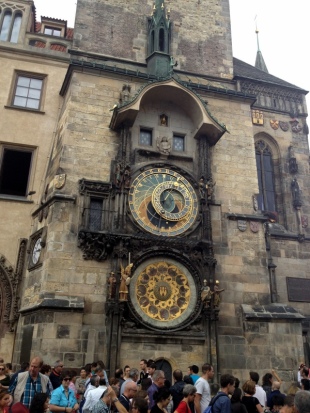 Prague is packed with tourist and biking is nearly impossible.  Except when you go out at 6:30 in the morning. 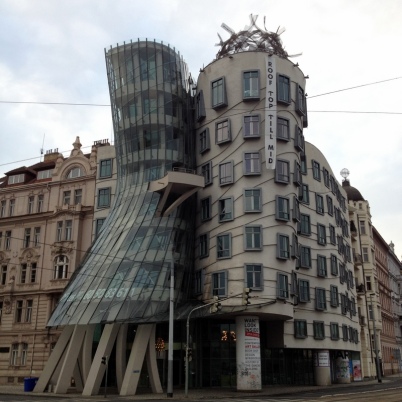 THE FAMOUS DANCING BUILDING OF PRAGUE

THE WORLD’S NARROWEST BIKE LANE, (NOTICE NO ONES UP YET). 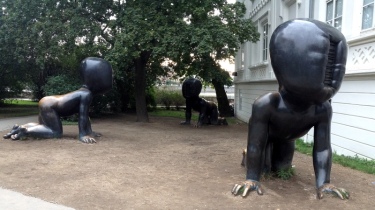 After riding both sides of the Vltava river(photos) Natasa wants to go back to the hostel, I opt for a tour of the PRAGUE PALACE (photos).  At that hour of the morning, no one was around, except the Palace guards, who told me to get off my bike (3x’s).  I ‘m a little lost, but I accidently bump into the hostel were staying at, thank goodness.  I did pass a farmers market on the way back.  I grab Natasa and Sara and we head back to the farmers market.

THE MIXED BERRY BASKETS WERE AWESOME! 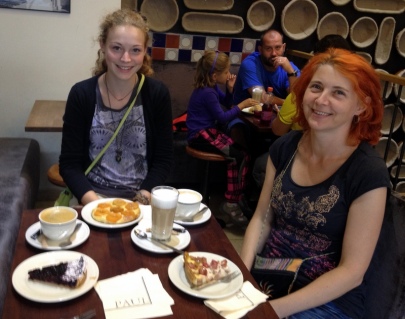 WELL, I DON’T HAVE ANY

Our good friend Stanley from Royan, France was in Prague at the same time we were.  We went on a hike around VYSEHRADSKE SADY (photos).

NATASA WAS REALLY ATTRACTED TO STANLEY

No trip would be complete without a visit from the Famous Rev. Phil with BIKE SMUT.   He’s having a showing Prague, while were in town.  We reserved him a bed in our hostel room.

SAYING OUR GOODBYES TO REV. PHIL AND PRAGUE

We’re finally starting our Czech Republic bike tour.  We’ve got our bikes packed up and were heading out of Prague, IN THE WRONG DIRECTION!

THE BIKE PATH IS AWESOME, BUT IT’S THE WRONG ONE.

DON’T FORGET TO RIDE YOUR BIKE WHILE YOU CAN OR GET AN E-BIKE AND CHANGE YOUR LIFE. 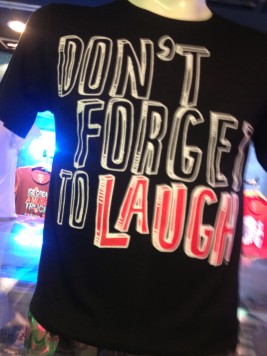