IN THE COUNTRY LESS THAN AN HOUR

THE POLICEMAN MENTION HOW MUCH THEY DESPISE GERMAN CHANCELLOR MERKEL.
I grabbed the bus at the border. I read that Greece is 80% mountainous. I´m not ready to tackle Athens, so my guide book suggest I not miss METEORA. It´s a good idea, plenty of climbing (in the bus), 5 or 6 tunnels some several kilometers long. 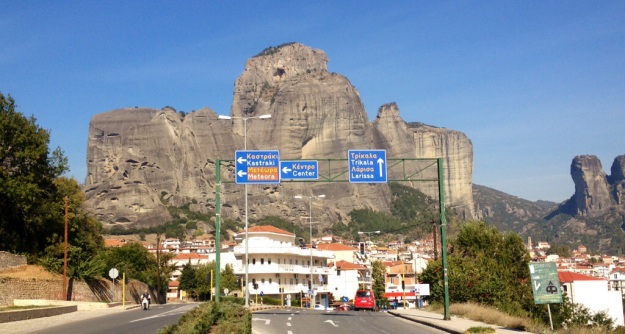 THIS IS THE VIEW COMING INTO KALAMBAKA.
I´m not religious, but religions around the world have made their impact on history (under statement). But when the opportunity arises:

I NEVER MISS AN OPPORTUNITY TO MINGLE WITH THE LOCALS (at the phone store).
I decide to ride the bus to the monasteries and hike down. 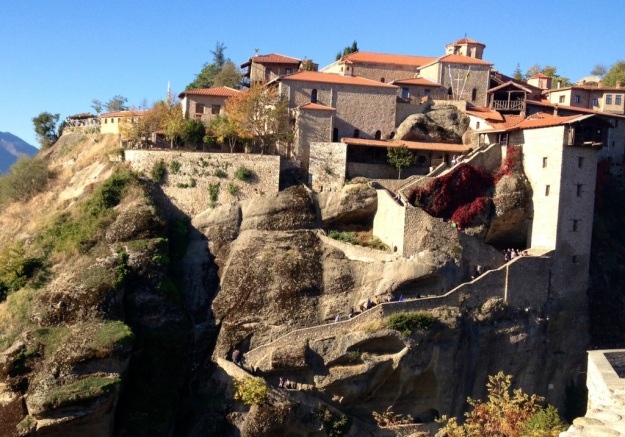 THERE USE TO BE 24 MONASTERIES BUT ONLY 6 ARE STILL STANDING.
The hike down was great (yep walking).

IT´S EASY TO GO CAMERA CRAZY HERE.
The monasteries cost 3 euro, but not for everyone. I walk in with a group of 40 people, someone grabs me out of the crowd and asks for 3 euro. I look around and tell him “no one else is paying”. I guess I look like a tourist, later I learn the museums are free for Greeks. I don´t look Greek? I think Merkel needs to hear about this. 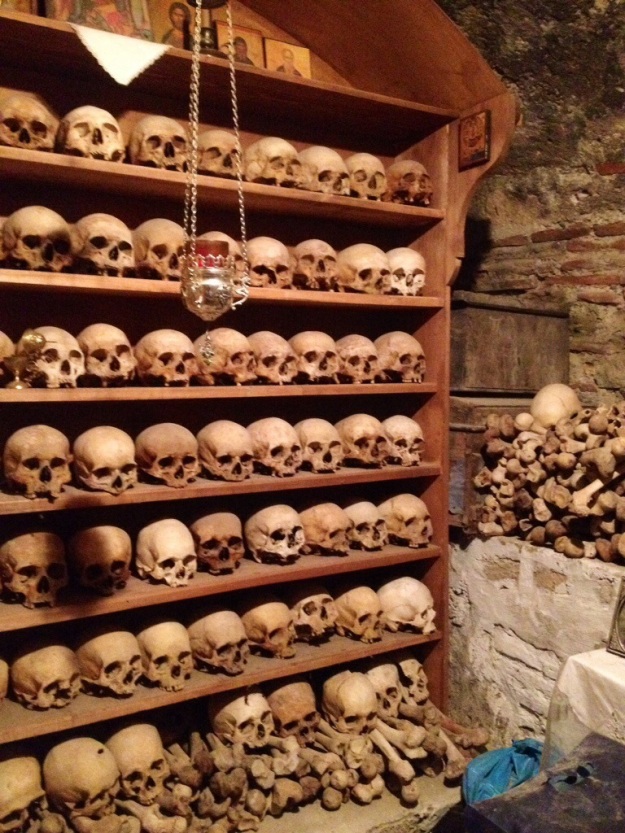 THESE ARE THE SKULLS OF PREVIOUS PRIEST.
I write Vincent, the French Cyclist I met in Albania and tell him this is a “not to be missed” tourist attraction. He responds with, “I´ll take the bus and meet you. Meanwhile, camping is 8 euro and a trailer is 9 euro. Since my sleeping pad is dead (leaks), a mattress for 1 euro, OK. 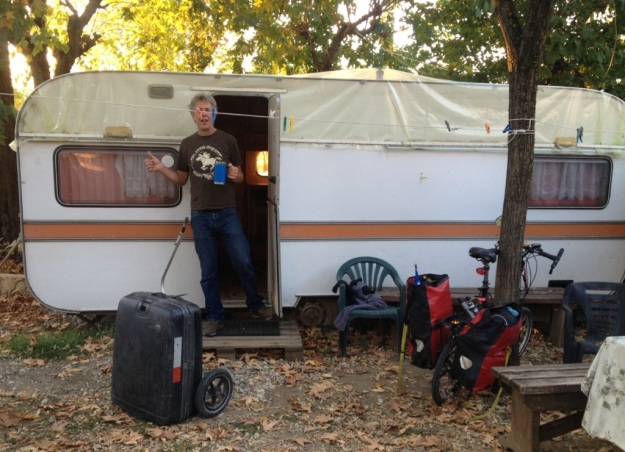 NO KITCHEN OR PLUMBING BUT AWESOME BED AND PRIVACY.

PLEASE NO TRAILER TRASH JOKES, IT ALL WORKS GOOD.
Vincent is not here yet, so decide to ride my bike to all 6 Monasteries. I arrive at one, closes in 10 minutes (it´s 1 in the afternoon!), I ride to the next one, closed on Wed. & Thursdays (winter hours). It´s still an awesome bike ride:

THE ROADS AND STONE WALLS WERE BEAUTIFUL.

I MADE THE RIDE INTO A LOOP, BIG LONG DOWNHILL SUPER FUN.
Being the off season, there is little to no traffic, it’s lots cooler but the pool is drained at the campground too:(
Vincent shows up and we do the whole tour again, this is my third visit to the monasteries. But it’s pretty awesome and so is the biking.

I USUALLY TOUR ALONE, BUT VINCENT IS REALLY FUN TO HANG WITH. (FRENCH?).

I LOVE ALL THE STONEWORK

HE HAS HIS OWN TENT

FRENCH DESERT, NUTELLA ON BANANA.
When your bike touring you can hear the livestock bells, sheep, goats and cows. I remember in Albania hearing the whole hillside valley ringing with bells.

I BOUGHT THIS PIECE OF ART, THE NECK BAND IS CARVED WOOD WITH A CARVED LATCH, IT IS F__ING BEAUTIFUL.THE BELL SOUNDS GREAT TOO!
THANKS FOR READING
JEFF
MY GREEK PHOTOS ARE HERE
MORE MONASTERY GOOGLE IMAGES FOR METEORA GREECE
NEXT? RIDING ON THE OTHER SIDE OF NO WHERE (no post cards?)

1 thought on “FIRST WEEK IN GREECE”