I knew a little about Greece before I arrived. I had heard about the Greek economic crisis and the austerity measures required for them to get more assistance from the European Union, namely Merkel. When I first arrived the policemen all mentioned how much they despised Merkel’s austerity measures as a requirement to borrow money.
I had planned to take the bus to a starting point, Kalambaka, before I learned Greece is 80% mountains, tough on a bike.

THIS IS ONE OF THE 6 MONASTERIES LEFT FROM THE ORIGINAL 24.
I emailed Vincent and asked him to join me in Kalambaka, he shows up and we tour Greece’s remote northern region, together.

HANGING OUT IN MY LUXURY TRAILER TILL VINCENT ARRIVES.
We visit several non tourist non post card villages. We were definitely the talk of the towns. We were in Elassona just 20 minutes , Vincent asks someone if they had seen an American on a bike, yes was the answer. People in the small towns were well aware of our presence. 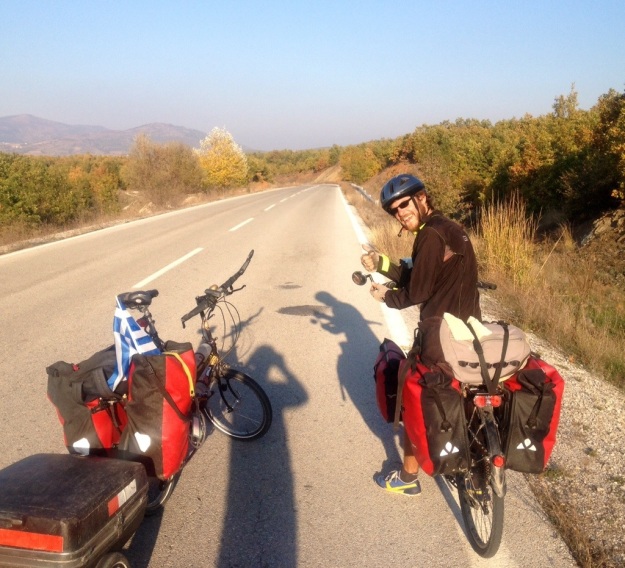 THIS IS SO MUCH BETTER THAN THAN TRYING TO CYCLE AROUND ATHENS.
Biking allows for the opportunity to meet like minded folks, like Yannis of Elassona. 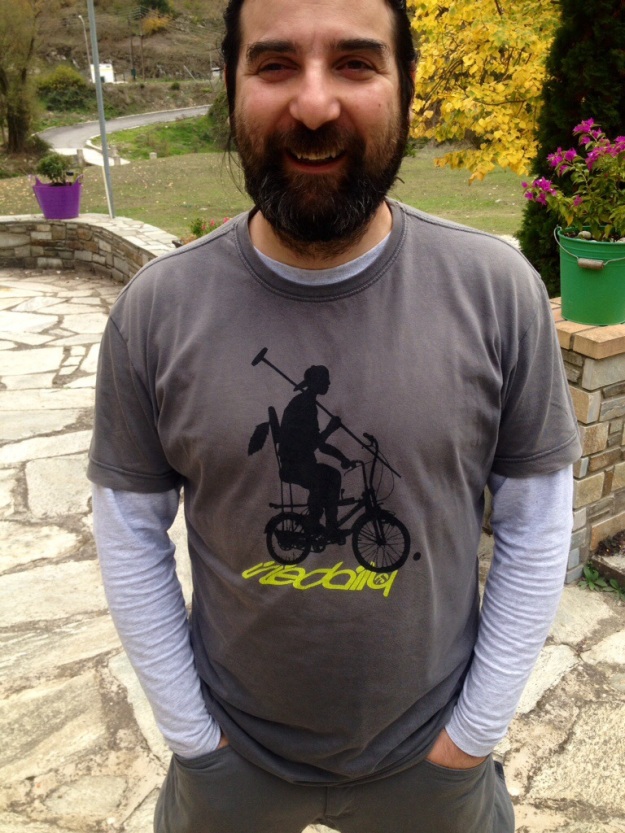 THE BIKE GURU OF ELASSONA AND GREECE!
Yannis explained some of the situations that lead to the Greek crisis. People were able to get car loans or any loan for that matter, no money down or credit check, (sound familiar?) As people lost their jobs, the loans went into default. Obama “saved” the American economy by borrowing, at some point it will have to be paid back. America is next for some real austerity measures with real pain, get ready America. 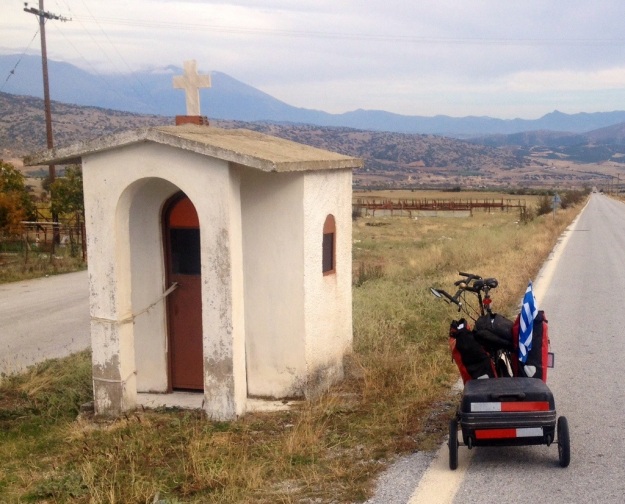 THE MANY ROADSIDE CHURCHES WERE CUTE, BUT
The priest of Greece are paid by the government, including their pensions. Yet the Greek Church has nearly 1 trillion dollars in assets, not just churches but hotels, parking lots etc. They have more than twice as much as Greeks total debt. They are being asked to contribute more instead of taking from the state, we’ll see.

OUR ROUTE AND TIMING WERE EXCELLENT, FALL WAS IN FULL BLOOM.
Walking around Elassona nearly 1/2 the store fronts were closed. Greece unemployment rate is 27% thats 1 in 4 people don’t have a job! They closed the state media, for America, that would be like shutting down NATIONAL PUBLIC RADIO, think about it.
Greece is full of valuable history and lessons to be learned from, like the fall of the Roman Empire. I visited Thessaloniki, Greece’s second largest city. I loved the city, Greek food is over the top great! I wish I had time to stay longer. The people treated cyclist with the ultimate courtesy and friendliness. Like Albania, many horns and thumbs up from drivers. I can’t wait to come back. 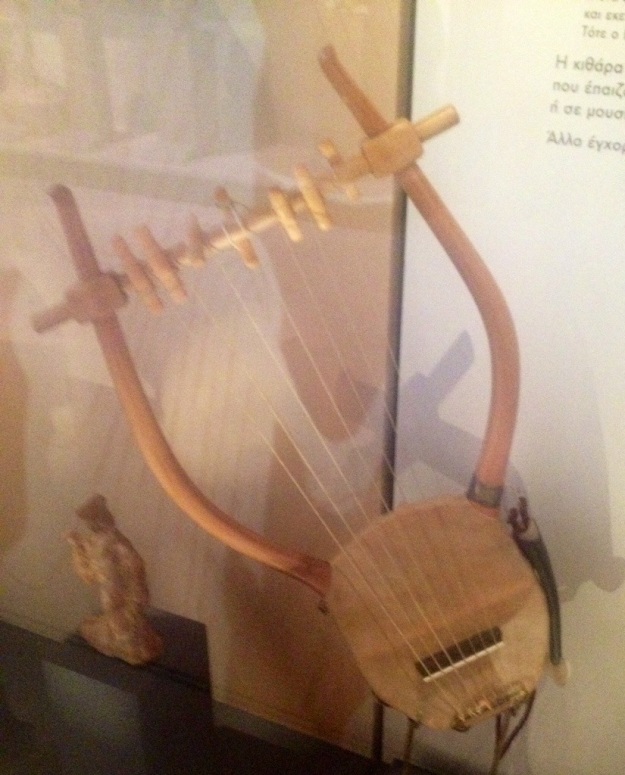 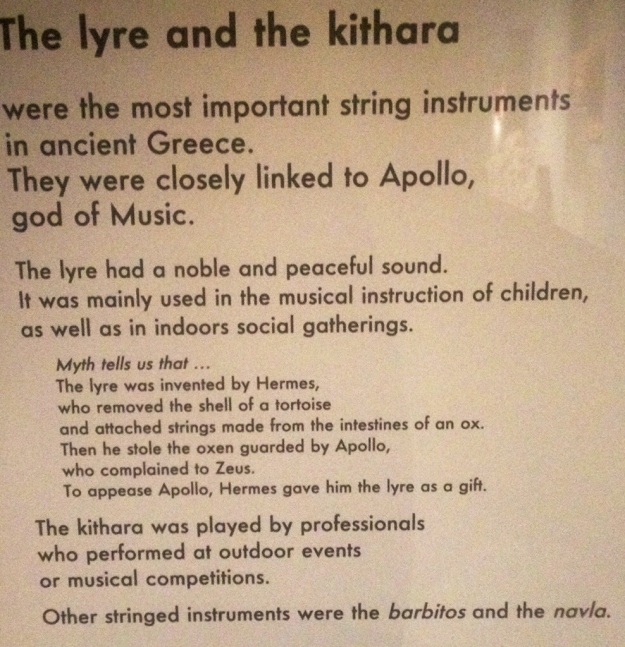 THIS INSTRUMENT WAS FROM THE ARCHEOLOGICAL MUSEUM IN THESSALONIKI, (interesting read)

EVERYONE IS DOING WHAT THEY CAN DO TO SURVIVE.

SOME OF THE ROADS WERE LINED WITH COTTON 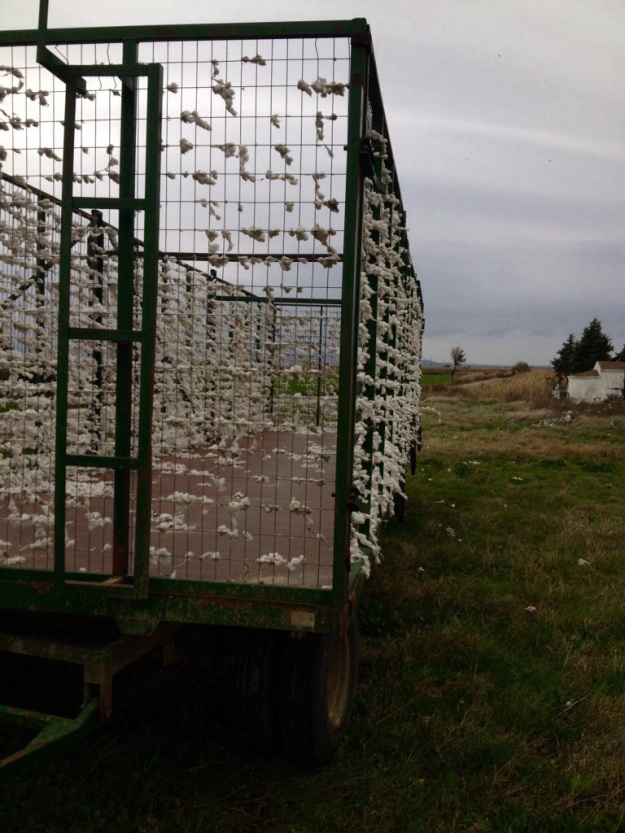 THE COTTON CAME FROM THESE “OPEN” TRAILERS
I have a video I shot of these vents spinning in the wind HERE
I HAD A GREAT TIME IN GREECE EVERYTHING WAS AWESOME, FOR TOURIST, BUT THE GREEKS ARE TRULY STRUGGLING. AMERICA IT’S TIME TO GET YOUR HOUSE IN ORDER OR WERE NEXT.
The bike ride to Turkey was one of the hardest days, head wind, attacking dogs, rain, machine gun touting guards ordering me around. My foot problems haven’t bothered me the whole trip, but after biking 2 days into a head wind, I can hardly walk now. I’m taking it easy in Turkey. I’ll be here till Dec. 20th, Natasa is coming tomorrow, can hardly wait.
I realize this blog post rambles, I’m tired. Seven months on a bike, camping, touring, blogging has taken a toll on me. I’m looking forward to 5 months of easy travel.
So in closing visit Greece, WHY? THE PEOPLE, FOOD, SCENERY, HISTORY. It’s a tough bike ride, I’m not sure that will be part of my return visit?

1 thought on “FINAL THOUGHTS ABOUT GREECE”