The Delta region’s isolation was great, but Brasov is the #1 tourist destination in Romania.  It’s central location in Romania allows you to easily visit all parts of Romania.  We picked a road that was a little longer but, but took us off the main traffic routes (MAP).

PULL OVER AREAS WHERE YOU CAN WORK ON YOUR CAR! 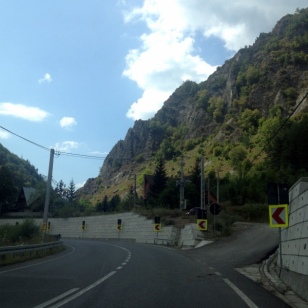 WE PICKED A NICE ROUTE 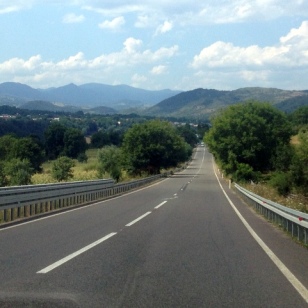 CARGILL IS HERE TOO 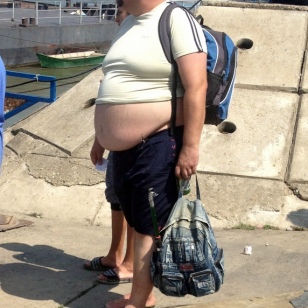 TO MUCH BEER & POLENTA

ANOTHER FUNERAL
We arrived in Brasov, using google maps, we circle the block numerous times because of all the one way streets.  We’re near our apartment and this lady comes up and offers to drive & park our car at our apartment.  She drives us around the block and then into her courtyard.  We finally figure out we’re not her guest, it was kinda funny.  Our apartment was right next door and our hosts dad was waiting for us. We were only 10 minutes late, mainly because of the apartment confusion.
The main square in Brasov is just like the photos, lined with beautiful Baroque styled buildings.  I like going out to eat, Natasa likes to eat at home.  So we bought some beans, salsa, green peppers, cheese and tortillas.  I ate bean burritos 3 nights in a row. So we had to have a beer to wash all those beans down.
We want to visit the Bran & Peles Castle’s.  But after the long drive to here, were spending the day just walking around Brasov. We started seeing the many many Dracula tourist souvenirs, we’re getting closer. 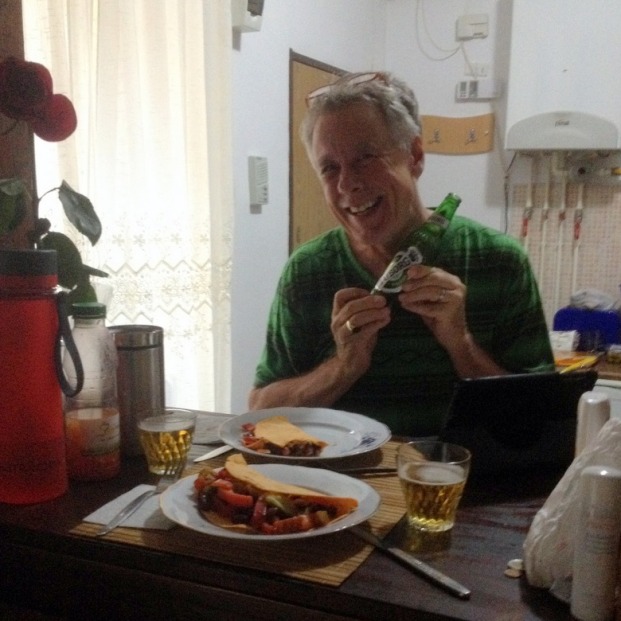 SOME MODERN HOUSING TOO 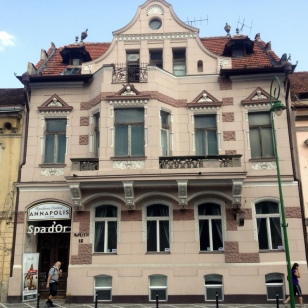 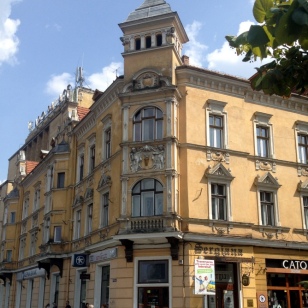 It was a sunny day of hiking around town. We visited the white & black  defense towers, the black church (called that because a fire inside made it black).   We saw a nice bike lane and went to get our bikes.  The bike lane was 2 blocks long then ended.  I talked to the guy renting bikes in the square and asked him “you haven’t bribed the right officials to get some bike lanes or what?”  He was like, “don’t get me started.”  later I saw a couple who rented bikes, I asked and they said they felt pretty unsafe.  Then I saw a bike fix-it station, Portland (USA Bike city) doesn’t have one of those that I know of?
I went to the History museum alone? whatever.  But I found it interesting that they had pictures of future princes and kings riding bikes as kids, from 1928.  Later, I was sitting on a bench waiting for Natasa, then a women (whom I suspected was working) sat on the bench next to me.  She took some photos with her flip camera phone, then Natasa showed up and she quickly left. 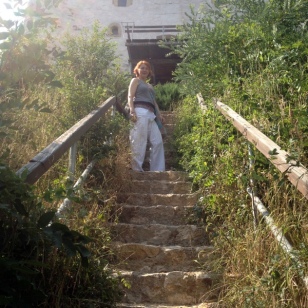 1/2 SIZE BIKE LANE, WE RODE ON THE SIDEWALKS 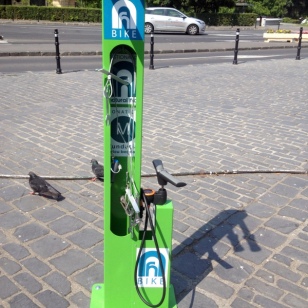 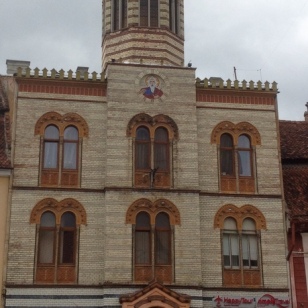 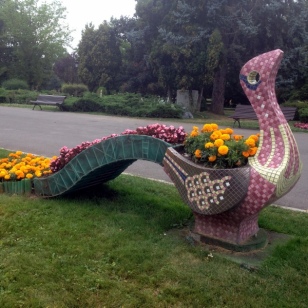 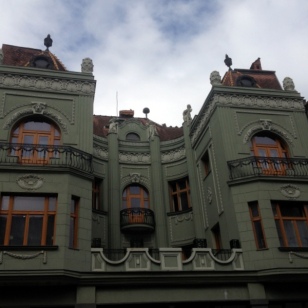 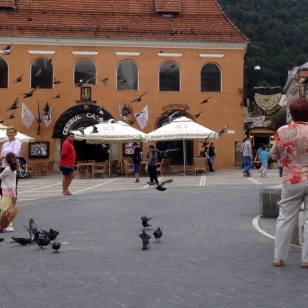 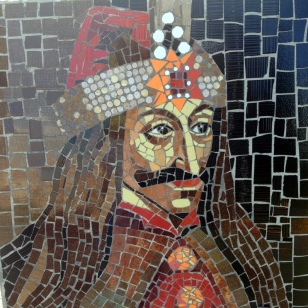 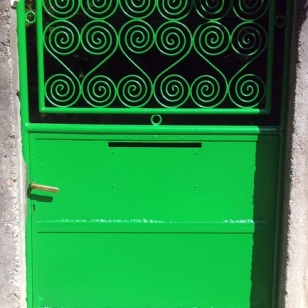 MARKETING USING BIKES FUN!
It’s tour day and were visiting 3 places, Peles Castle, Rasnov Fortress and Dracula’s Bran Castle.  We could have driven ourselves, but it’s vacation and we’ve done quite a bit of driving already.
Pele’s Castle was spectacular,  I’ve been to lots of Castles but Pele’s really stands out.  It’s weird but Romania’s queen died the day before we got here.  They were closing the Castle next week for her funeral.  There were TV reporters and cameras in front of the castle  The interior was mostly carved black walnut wood, everywhere. .  I didn’t pay the extra photography fee, one because there are tons of photos online HERE, using real cameras! I have a few.  The carved chairs and tables took 3 generations to finish.

THE QUEEN IS DEAD

The Rasnov Fortress was OK, the views of the towns & fields below are pretty awesome. 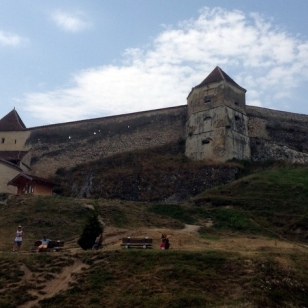 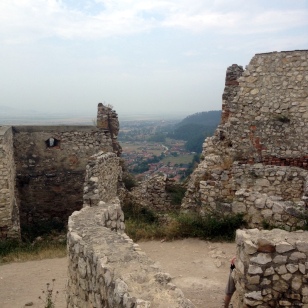 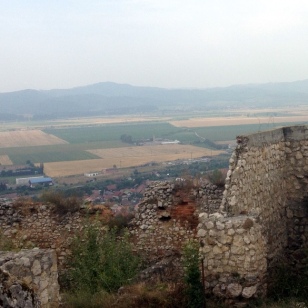 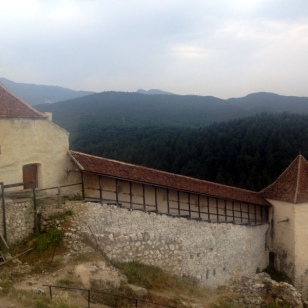 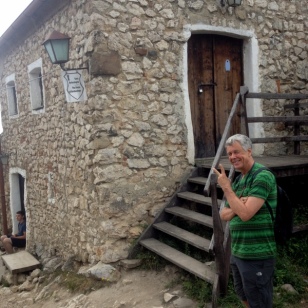 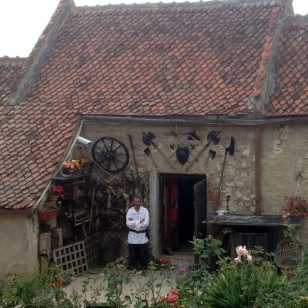 Who or What is Dracula?  Dracula is the 1897 Gothic horror novel by Irish author Bram Stoker,  The claim is that Stoker created Dracula using VLAD II DRACULA OF WALLACHIA’S .  Vlad’s reputation as “Vlad the Implaler” for his thirst for torture, by impaling his victims it’s said to be who Dracula was based on.    “He roasted children, whom he fed to their mothers. And (he) cut off the breasts of women, and forced their husbands to eat them. After that, he had them all impaled.”  There are stories he had 20,000 people impaled on huge stakes, at one location.
So we’ve arrived at the Bran Castle, supposedly where Vlad had spent some time, but others claim, he never set foot in Bran Castle.  The Castles position on the hill, feels & looks like Dracula’s home.  Someone believes all the stories or good marketing, because there are hundreds of tourist here. 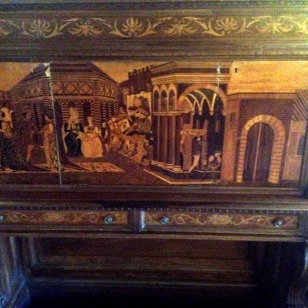 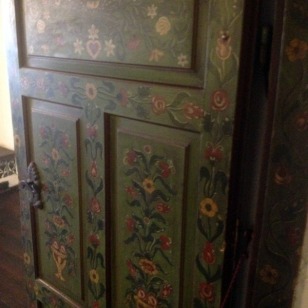 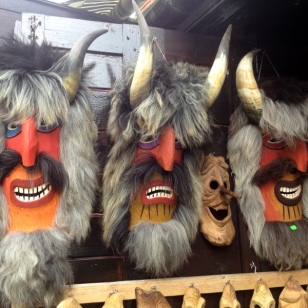 TOURIST MASKS
There’s so much controversy  about  Dracula and the Bran Castle connection, that aside, it’s still a good visit.  There were very many tourist stands selling everything Dracula: cups, shirts, hats, pens and more (I bought a cup).
If your ever in Romania, Brasov’s central location, architecture  & history makes it a must visit.
Thanks, Jeff