I was in Portugal and spotted this Policeman who looked like the “terminator” cop. I wanted to get a photo. I asked if I could, then his friend said yes, I just wanted terminator, but OK, I took this photo 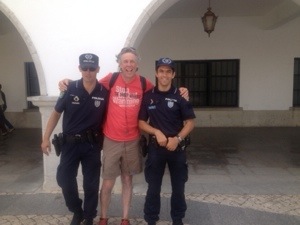 PORTUGUESE POLICE PHOTO WITH THE TERMINATOR COP AND HIS FRIEND
I take the ferry to Spain, there were 2 policeman who were giving me directions to the phone store , I showed them the Portuguese photo then they offered to have their photo taken.. I said “Heck Ya.” This was the start of collecting policeman photos in every country I visited.

THE SPANISH POLICE WERE SUPER FRIENDLY AND HELPFUL
A friend (?) from France wrote and told me to look out for Spanish cops. I sent him this photo and asked, “these guys?”
I’m biking around France, shopped at a farmers market and spotted 2 policeman. I asked him for photo? No. I show him the Spanish photo, he walks away. He joins his partner across the street, then he waves me over. 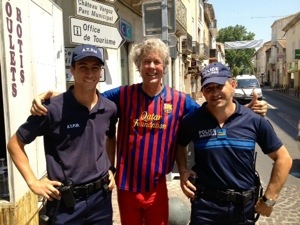 TOOK SOME CONVINCING BUT I FINALLY GOT THE PICTURE OF FRENCH POLICEMAN.
My first day in Venice, Italy at the ATM I spotted 2 policeman and they eagerly agreed to the photo.

THESE ITALIAN POLICEMAN NEEDED NO CONVINCING TO HAVE THEIR PICTURE TAKEN.
Slovenia was a real task, I had to compromise some with this one. First, there are hardly any police around! I had always tried to get 2 policeman together, that wasn’t going to happen here. 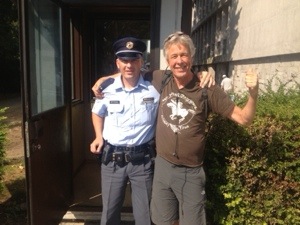 THIS IS THE SLOVENIAN PARLIAMENTARY BUILDING “POLICE” GUARD. THAT’S THE BEST I COULD DO. There are really no police to be found and not 2 together for sure.
The Croatian policeman shot was just about as difficult as the Slovenian. I hardly ever saw the police here either. But when we were dropping off bike boxes at the ferry dock, I spotted several armed “dock” police.

THIS IS THE CROATIAN MARITIME POLICE, AGAIN IT’S THE BEST I COULD DO.
The Montenegro police photo was totally by “accident.” I was only going to be in Montenegro for 24 hours, so my chances were pretty slime. The bus I was riding in got in an accident, so the police arrived to take a report.

THE MONTENEGRO POLICE DELIVERED THIS PHOTO BY WAY OF AN ACCIDENT.
Albania was fairly easy, the first night in town I walked into town with a local. He convinced them it would be OK, somehow? 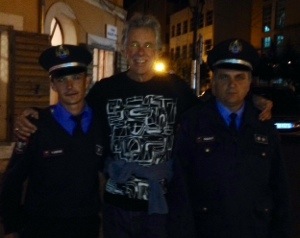 The Greek policeman photo should have been of at least 2 policeman. Of the four policeman, only this one agreed to a picture. 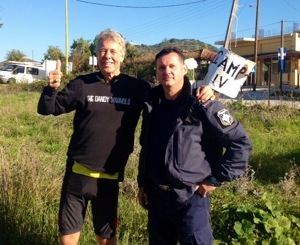 THE GREEK POLICEMAN ALL COMPLAINED ABOUT GERMAN CHANCELLOR MERKEL’S AUSTERITY DEMANDS
This next photo of the Turkish police is the Gold Standard from which all policeman photos should be judged.

HOT TURKISH POLICEWOMEN WITH MACHINE GUN–YEP HOLY SHOT
It was fairly easy to get all the 10 countries I visited policeman photos, but one Morocco. When I asked maybe 10 different policeman the answer was always the same “IT IS FORBIDDEN.” So I pretended to be adjusting my music while taking a few pictures: 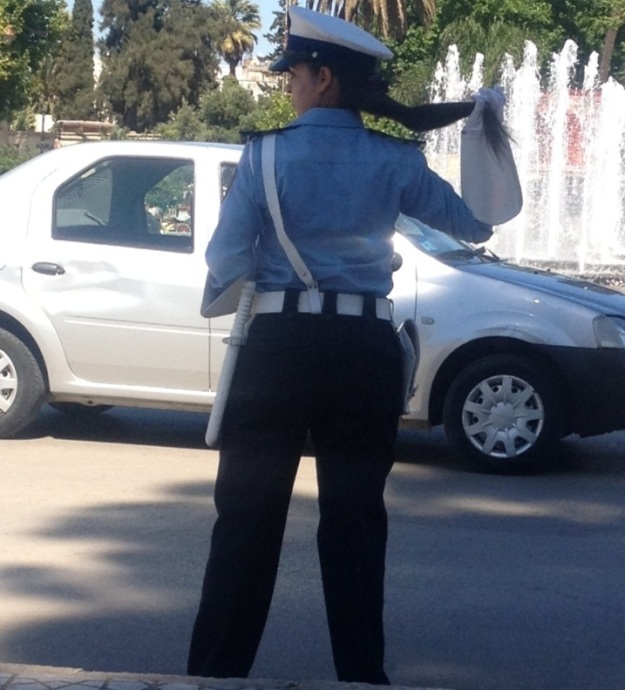 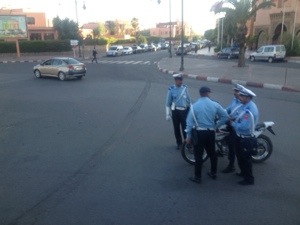 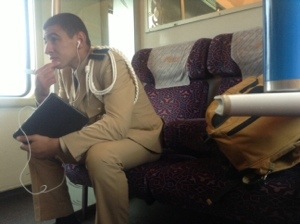 THANKS FOR READING, TALK SOON
RIDE ON, JEFF