I’m came to Airvault because that’s where Vincent of Albania and Greece bike touring fame lives.  We also exchanged many corresondences  after we parted ways 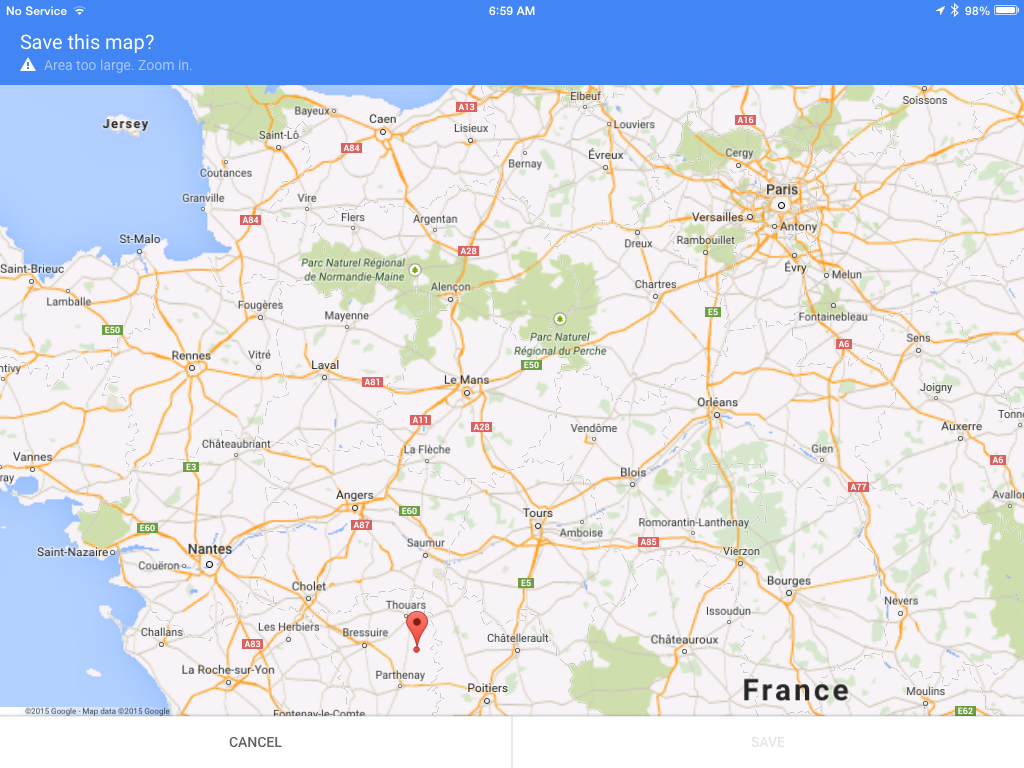 Vincent moved out of his parents basement, so I moved into the basement, super great place.  Both of his parents are interesting, gardening, cooking and some travelling too.  I had a gardening business in Portland for 25 years, so I know how much work their yard is to maintain. 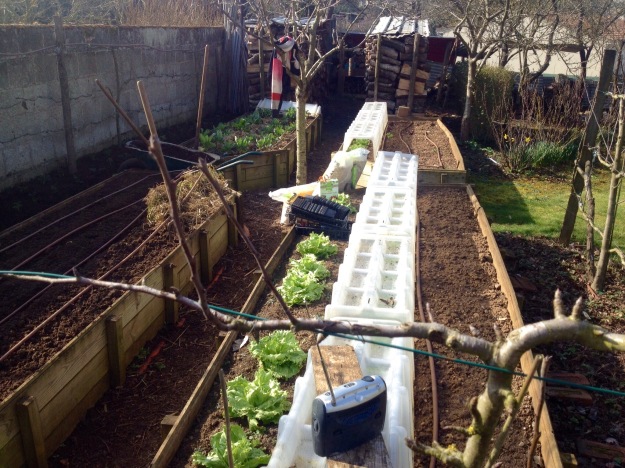 THIS IS FRANCOIS (VINCET’S DAD) WINTER GARDEN OF LETTUCE, HE USES THOSE PLASTIC COVERS TO SUCCEED

The next day, Vincent and I biked around the forgotten villages of the French countryside.  We passed through one village and Vincent said “this is where my Dad grew up”,

HE ONLY GREW SO FAR!

Marie-Francois spoke a little english, Dad? nearly none.   Vincent said it was killing his Dad because he loves to talk.  They asked me to help Vincent quit smoking, Dad ran marathons, so go figure.

Vincent got us a couple bikes so off we go.  We explored places you couldn’t find on your own without a local guide like Vincent. 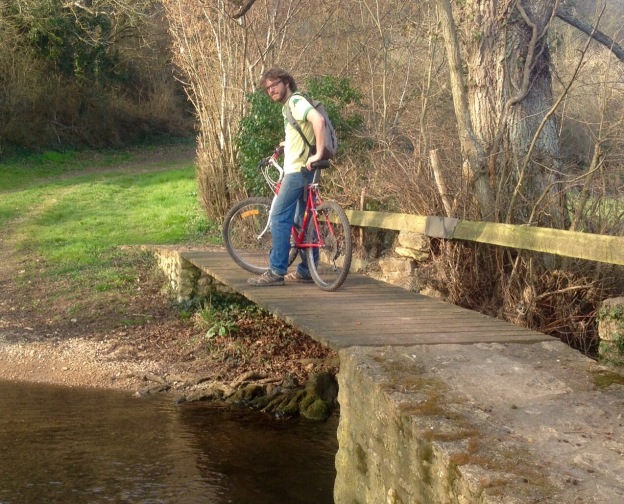 THIS LOCAL GENTLEMAN GOT US THE PHONE NUMBER FOR SOMEONE TO LET US INTO A HISTORICAL BUILDING. 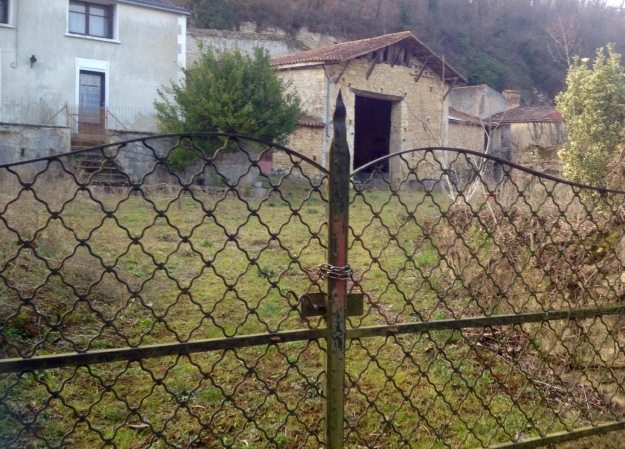 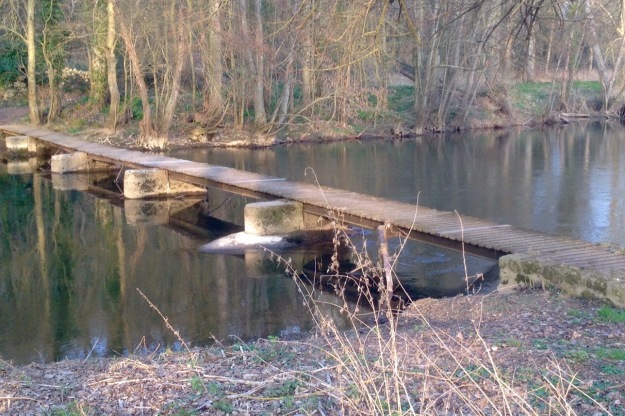 I TOOK THIS PHOTO FROM THE “NEW” BRIDGE 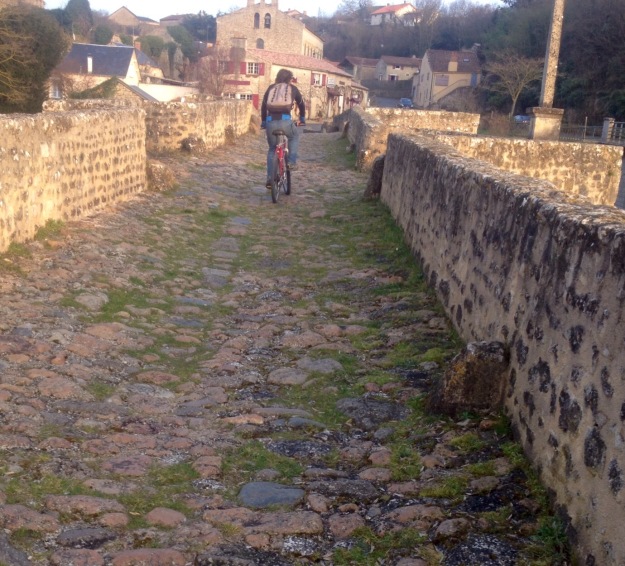 I ASKED VINCENT IF WE COULD RIDE OVER IT, EASIER SAID THAN DONE,, I WALKED THE BIKE , IT WAS ROUGH..

VINCENT IS A GREAT TOUR GUIDE, EVERYTIME WE FELT A LITTLE LOST, HE GOT OUT THE MAP AND SORTED IT OUT.

THIS IS THE WALK  FROM VINCENTS HOUSE BACK TO HIS PARENTS HOUSE.

THIS CASTLE HAD THE  MOET COMPLETELY AROUND IT, JUST LIKE A REAL CASTLE!

WE WERE GOING TO TAKE A GET HIGH BREAK, THEN CROSS THIS STONE BRIDGE AFTER, I DECIDED TO TAKE MY BIKE OVER BEFORE,THEN VINCENT CHANGED OUR ROUTE.  HE VOLUNTEERED TO RETRIEVE MY BIKE. 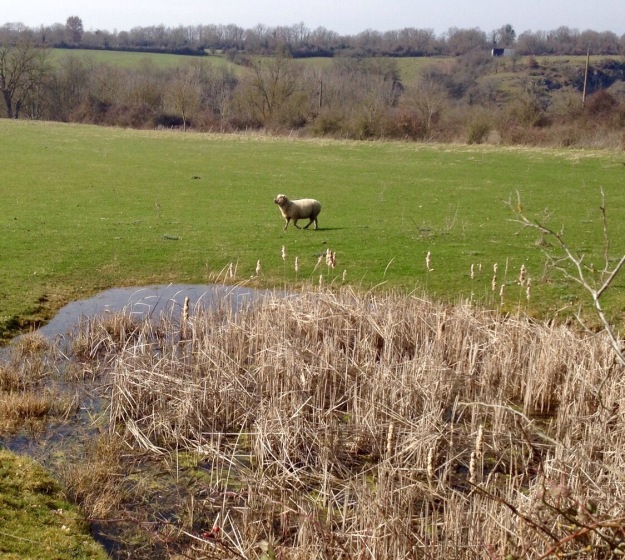 VINCENT TOOK 10 PICTURES OF THIS SHEEP IN THE FIELD, SO TO MAKE HIM FEEL BETTER, I’M POSTING IT. 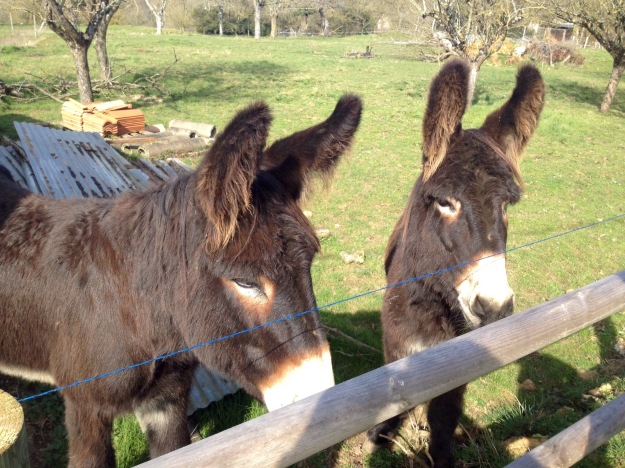 SOME OF THEM WERE SUPER HAIRY

THIS IS THE NOW CLOSED AND FORGOTTEN  AIRVAULT TRAIN STATION

ALL OF THESE TREES ARE COVERED WITH ENGLISH IVY.  ENGLISH IVY, AN INVASIVE PLANT, IS EVERWHERE.  THERE NEEDS TO BE A NATIONAL CAMPAIGN TO STOP IT FROM SPREADING.  YOU CANNOT BUY IVY IN OREGON.

Vincent bought us some tickets to see Portland’s band, THE DANDY WARHOLS, in La Rochell..  There’s an island outside of La Rochell, called Ile de Re.  We pack up the bikes and head to the island, for several days of cycling.

WE’RE KILLING IT ON THE ISLAND

I SPRAWLED OUT AND JUST WATCHED THE CLOUDS FLOAT BY AND REALIZED I LUCKY I AM TO BE ALIVE. 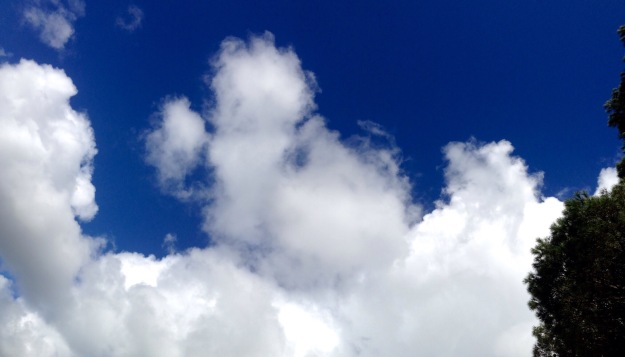 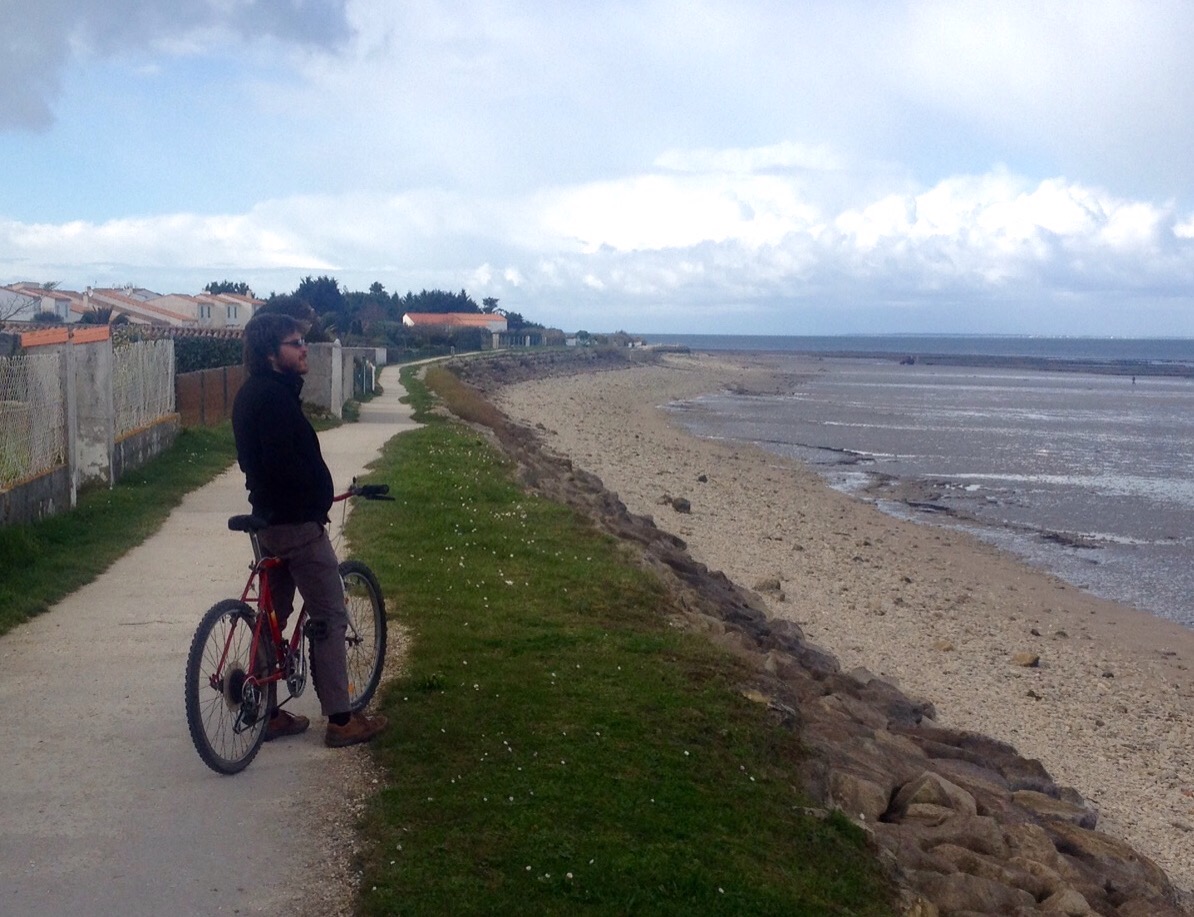 THIS  IS A WALKING PATH, NO BIKES ALLOWED!! BUT “OFF” SEASON TRAVEL HAS IT’S PERKS, WE HAD THE ISLAND TO OURSELVES.  YOU CAN SEE THERE’S NOBODY HERE,  JUST DRESS WARM!

THIS IS THE SCENE OF THE CRIME, VINCENT WAS TURNING THE CAR AROUND AND CRUNCHED THE REAR FENDER, BAD.  I TOLD VINCENT TO TELL HIS PARENTS HE QUIT SMOKING SO THEY WOULDN’T CARE ABOUT THE CAR.

WE SAW THE DANDY’S IN LA ROCHELL,   I’VE SEEN THEM MAYBE 12 TIMES,, I KNOW ALL THEIR MUSIC INSIDE AND OUT.  THERE WERE TIMES I DIDN’T KNOW WHAT SONG THEY WERE PLAYING, THE SOUND WAS BAD. 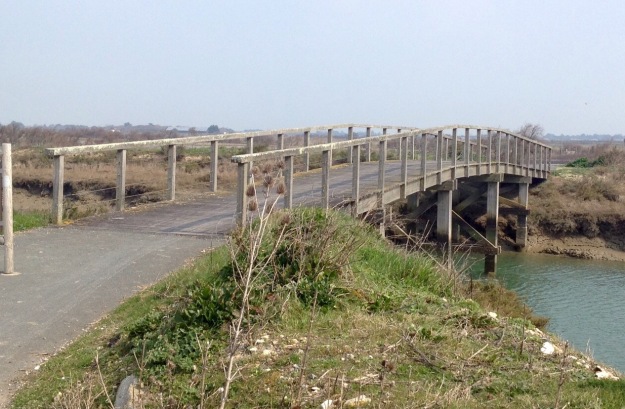 THE BIKE PATH AROUND THE ISLAND WAS OFF ROAD AND ALWAYS NEARLY CAR-FREE WHEN WE HAD TO USE A ROAD.

BICYCLE DOOR MAT,  I WANTED TO BUY IT. BUT FLYING EASY JET THEY DONT LIKE EXTRA STUFF.  I PAID $500 EXTRA TO SEND MY BICYCLE & CAMPING GEAR A COUPLE YEARS AGO. MAYBE THEY LIKE EXTRA STUFF? 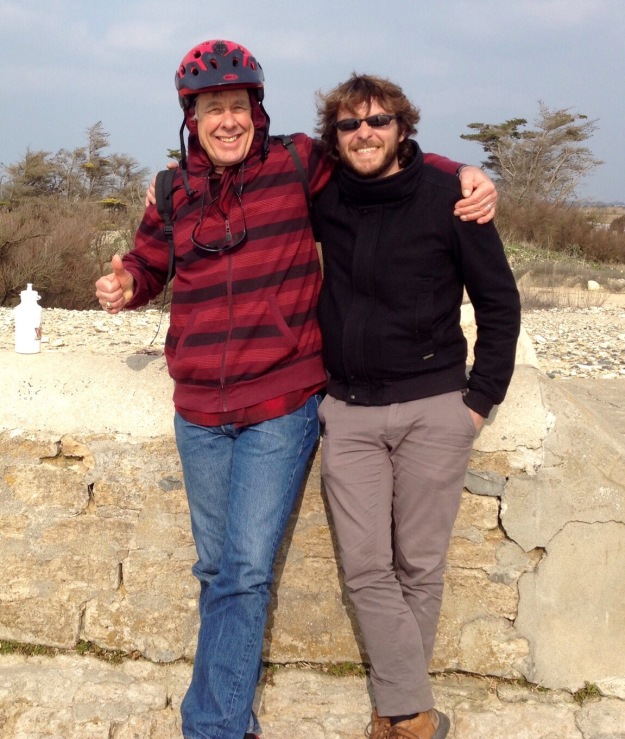 HANGING OUT OCEANSIDE WITH MY GOOD FRIEND AND BIKING BUDDY, VINCENT. IT DOESNT GET ANY BETTER THAN THIS. 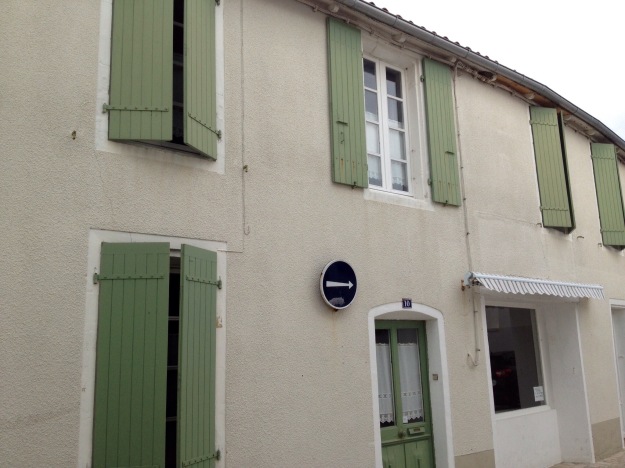 EVERY RESIDENTIAL BUILDING LOOKED LIKE THIS, ONLY MAYBE WITH DIFFERENT COLORED SHUTTERS, THAT’S IT.

II SWEAR 1/2 THE FRENCH AT ANYONE TIME ARE WALKING AROUND WITH A BAUGETTE IN HAND, IN A BIKE BASKET TOO!

THIS IS VINCENT’S NEW UPSTAIRS BEDROOM, FROM THE PARENTS  BASEMENT TO THE SECOND FLOOR, MOVING ON UP!

It’s our last day in Airvault,, Vincent’s asking biking? hiking? I’m beat, I tell him I just want to wash his parents cars,, they were dirty.  I like showing my appreciation for them hosting me. HIs parents served us Foie Gras, cheese fondue  with baugette!! with homegrown lettuce  salad, which was super cool. 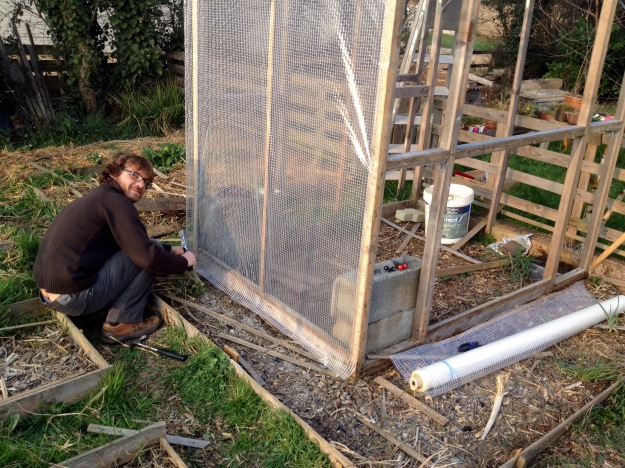 WE WEREN’T VERY GOOD AT GETTING THE PLASTIC TIGHT BEFORE STAPLING, IN CASE YOU COULDN’T TELL.

THE BRITISH RETIRES HAVE FOUND AIRVAULT, THIS IS WHERE THEY STORE THEIR TRAILERS IN THE WINTER.

II had a super time with Vincent and his parents.  The thing that impressed me the most were all the birds we saw and heard while on our bike ride around Airvault, WOW!   I didn’t hear that many different birds in the jungles of SE Asia.  If birding and biking is something you enjoy, you must visit Airvault,  put it on your list, NOW.

Vincent spent 6 months living on Crete and was going to return.  But upon his return to Airvault I think he realizes how compareable they reallly are.  He has a great project going on with his dad. Vincent seems to have the decsion to live Airvault, awesome choice.  Now it will be easier to visit Airvault sooner, with Natasa.  Thanks for staying Vincent, hope to see you sooner than later.

NEXT?  POITIERS, FRANCE WITH CAROLE 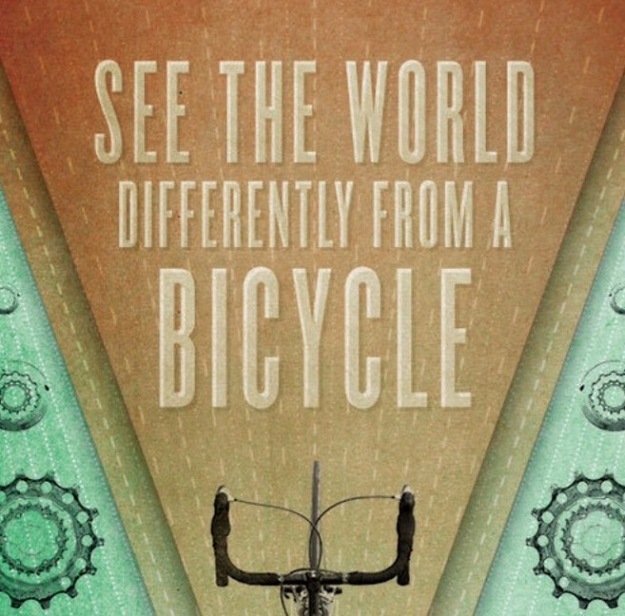