The tunnel talk has gone on for forty years.  So the EU stepped up by giving Slovenia 35 million euro of the eventual 53 million euro total cost.  The route was confirmed in 1991, the year Slovenia broke away from Yugoslavia.  The financial details were resolved in 2006 and construction started in 2013, the year I got here.

THIS IS ONE OF THE REASONS FOR THE NEW TUNNEL, ONE WAY TRAFFIC ONLY

Natasa and I made a bike ride we call the “Super 8”, it’s 8 km from Skofja Loka.  For 2 years we rode on the new “highway”, before it opened.   It was really interesting watching the tunnel and new road take shape.  I took photos all during the construction up to and including the opening ceremony.

TRENCHING TO MOVE WATER FROM THE HILLSIDE 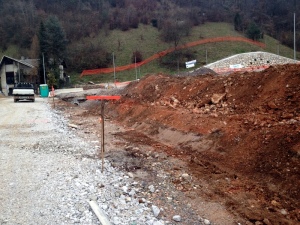 THEY LAID PIPE IN THE TRENCH 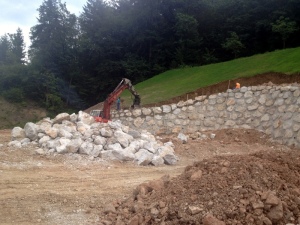 WHERE TUNNEL COMES OUT

TUNNEL IS THROUGH, BUT INTO A PILE OF DIRT

Slovenia is mountainous, so there are lots of tunnels, it must be quicker in the long run to bore through the mountain, than build a road over the mountain.   I walked  and rode my bike through several times, days before the official opening.
THESE ARE PICTURES A FEW DAYS BEFORE THE OFFICIAL OPENING

TO REMOVE WATER OR KEEP YOU AWAKE WHILE YOUR DRIVING? i JUST DON’T KNOW 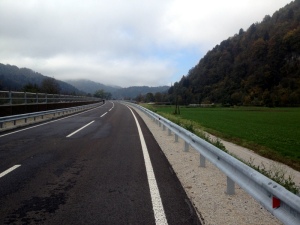 VIEW OF THE OLD ROAD 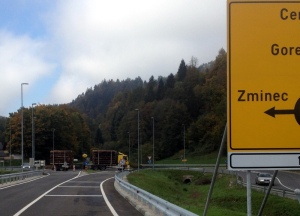 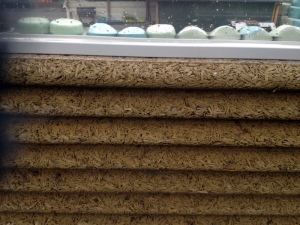 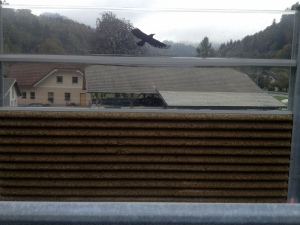 PUT A BIRD ON IT 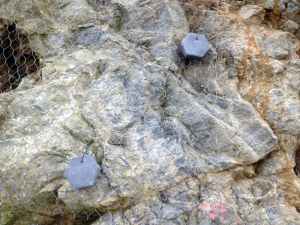 FENCING USED TO KEEP ROCKS OFF THE ROAD 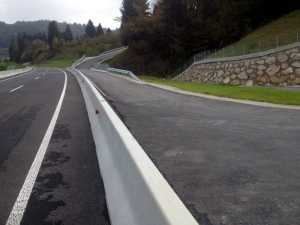 THE ROAD ON THE RIGHT IS THE NEW SUPER 8 ROUTE

THE ROAD NOW ON THE LEFT IS PART OF SUPER 8

LAST TIME THIS DOG WILL BE LEASH FREE ON THE HIGHWAY. 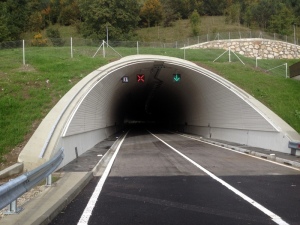 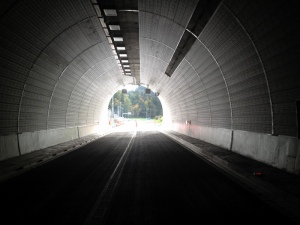 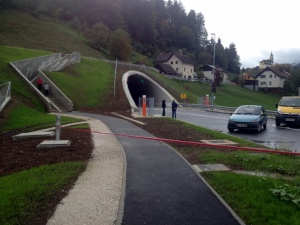 in the middle of the tunnel it echoes and is noisy, but they wrapped 10 meters at each end of the tunnel in soundproofing material.  It’s amazing how quiet it is, probably to help the neighbors sleep at night. The day of the opening I was riding to Ljubljana, so I stopped by for a last look.  A worker stopped me, I explained (In English), I wanted to just ride through, then he waved me through. I know it was the English that got me through. , he obviously didn’t speak any. 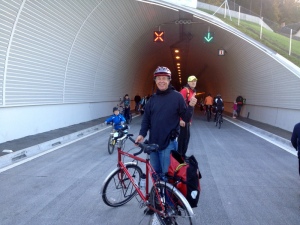 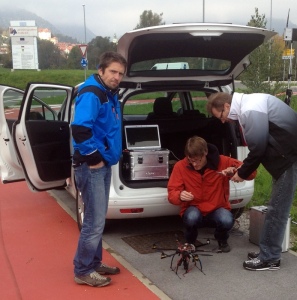 A DRONE TO CAPTURE THE EVENT 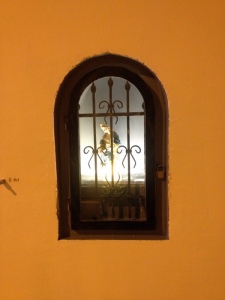 NO PROJECT WOULD BE COMPLETE WITHOUT A RELIGIOUS SACRAMENT

EMERGENCY TUNNEL ESCAPE IN THE MIDDLE OF TUNNEL 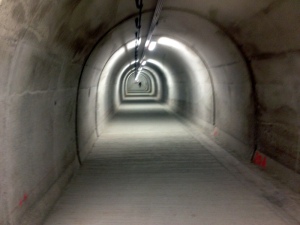 THEN THE OTHER WAY 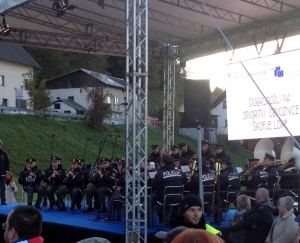 I KNOW WHERE ALL THE POLICE ARE TODAY.

LOTS OF PEOPLE SHOWED UP 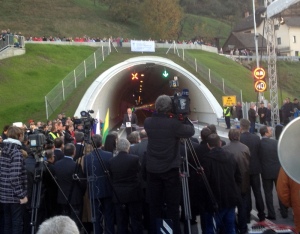 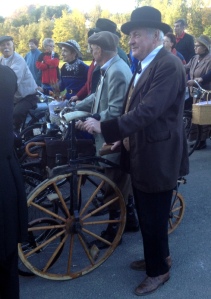 We were out of town when they had a celebration for reclaming of the old town.  The big trucks and lines of cars waiting to get between the buildings, it was time for a tunnel.  The tunnel seems to be mostly good except for one thing.

WITH ALL THE CARS PASSING BY HERE, HITCHHIKING USE TO BE EASY

NOW? NO CARS AND NO HITCHHIKERS

Natasa talked with the people who live on the ‘old” road.  They said big trucks were still using the old road and felt the new road wasn’t on truckers GPS yet, who knows.
I’ve been super busy, hence not much blogging, but rest assured we’ve got lots of adventures to share, that’s why we’ve been busy.  There’s a balance between living the adventures here in Slovenia and writing about them.
I came across this article on BBC about Slovenia:: THE LAKE AT THE END OF THE WORLD

I’m going to England for the Climate Change March on Nov. 29, then Bristol to see Courtney Barnett, then to Paris where the World Climate Change Summit is taking place..  First I plan to volunteer for the protest and in between be a tourist for a couple days. 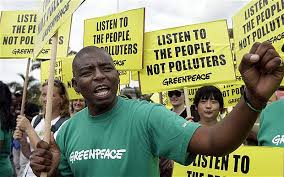 IF WE SAY “IT’S FOR THE CHILDREN” THEY’LL LISTEN!?

LAST TIME I CHECKED CRAIGSLIST THERE WASN’T ANOTHER PLANET FOR SALE. LET’S TAKE CARE OF THE ONE WE HAVE.

If your in London on Nov. 28 or Paris Dec. 12, email me and we’ll meet up at the Protest.
and whoever you are out there, thanks for reading our blog.
NEXT: MUSHROOM PICKING IN SLOVENIA
TILL NEXT TIME
JEFF

I PLAN TO SEE THE “THEE OH SEES” IN LONDON

Come live in a 1000 year old medieval village.  Come see what life was like before the car.  We have an apartment in the “center” of the old town, that sleeps 5.  Bakeries, coffee shops, restaurants,  post office, banks,
grocery stores, museums, craft and gift shops and more all within a 2 minute walk or less.

I had lived in Portland for 35 years, In 2013 I biked from Lisbon, Portugal to Istanbul, Turkey.  I rode through Slovenia and fell in love, with the country too.  I married Natasa and have been here almost 2 years now.  Skofja Loka is what Portland wants to be, a low car use-walking town. We live in the old town and are renting the apartment that Natasa’s brother owns, downstairs from us.
You can visit most of Slovenians highlights in just a one hour drive or a nice bus or train ride.

PHOTOS OF THE APARTMENT

KITCHEN WITH ALL APPLIANCES INCLUDING DISHWASHER

BATH WITH SHOWER AND WASHING MACHINE

SUMMER DAYS BY THE RIVER
I always tell the tourist to go swimming, but I hadn’t gone myself.  So I started going everyday.  I invited Natasa, she declined to swim but said she would go watch. After watching several times  she finally put on her swim suit underneath her clothes and we made the 5 minute walk to the river. She finally went in and we both enjoyed hanging out in the river.

NEW AIR B&B APARTMENT
We opened an Air B & B apartment in the center of the old town.  Natasa’s brother owned the apartment below us. He wasn’t having any luck renting it, so we decided to try an Air B&B apartment.  We’ve had a few guest, if you want to come to Skofja Loka here’s the link to the
OLD TOWN  MEDIEVAL MANSION.  FYI you can stay in the European Union for 3 months without a special Visa.  Come rent the apartment for a month or 3, no car needed, it’s a great experience.

IT’S RIGHT ABOVE THE TOURIST OFFICE

We would have gotten 4 stars but the outside of the building is falling apart.   Owning  a building with 5 other people, it seems nearly impossible to get them to agree on anything.  Your best and greatest asset is your home, letting it fall into disrepair is bad money management, I wish they understood that.

THE NEW BY-PASS TUNNEL IS ABOUT TO OPEN
I’ve been here in Skofja Loka for almost 2 years and all that time they have been working on a Tunnel to by-pass the Skofja Loka bottle neck.

ONLY ONE LANE OF TRAFFIC AT A TIME THROUGH HERE

I talked with the bus driver one day and he said they have talked about the by-pass tunnel for 30 years.  The European Union gave Slovenia the money, but they had to finish by a certain date or they had to return the money.  I would sometimes see them out there on a Sunday working, ( I don’t think they had the money to give back).

WE GOT A KITTEN

Sara and Natasa had a booth at the old town garage sale.  They sold a few things and got a few things too–a kitten.  I’m home alone some days so I also thought a cat would be fun.

I OPEN THE CABINET

AND IN JUMPS THE CAT

THERE’S LOTS OF CONSTRUCTION PROJECTS TO CLOSE OUT THE SUMMER

RE-INSTALLING FENCE AROUND THE PLAGUE MONUMENT

WORKING ON THE SUICIDE FIRE ROOF

NEW ROOF AT OUR NEXT DOOR NEIGHBORS HOUSE.

IT’S FALL, TIME TO STORE SOME FOOD AND TRIM SOME FRUIT TREES
I left a huge vegetable garden and fruit orchard, back in Portland.  Our patio garden here only produces so much food. so Natasa and I enlarged her parents garden.  With our tomatoes, I canned 30 jars of Italian sauce and Mexican Salsa. One of my reasons for not starting a business here in Skofja Loka was that I could help her parents.  Food is a great thing to share with others, so working on a community garden is very rewarding.

MAKING THE NEW GARDEN WITH NATASA AND HER DAD, FRANC

STUFFED ZUCCHINI FROM THE GARDEN

READY FOR WINTER, WALNUTS AND FIREWOOD

APPLES STORED FOR THE WINTER AT THE PARENTS HOUSE

A KILOMETER OUT OF TOWN, CORN BEING HARVESTED

SOME FUN PICTURES FROM AROUND SKOJFA LOKA

TURNING IN MY FBI REPORT SO I CAN LIVE HERE.

WOOL AND SHEEP SHOW, TRAVELING COMMUNITY RUG, OUR TURN TO ADD TO IT.

FAMOUS LOCATION OF MY BIKE RIDES TO LJUBLJANA 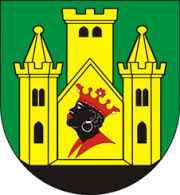 FYI, there are virtually no black people in Slovenia, so this is a remarkable commemorative in more than one way.
I keep thinking I’m going to run out of fun stories, but I’m about a month behind now.  We’ve used two of our honeymoon gifts to adventure around Slovenia.  I took a train-bike trip to the coast.  So if your a bike enthusiast (or a wanna be) I’ve got some fun bike stories coming.
I discovered this new musical artist, COURTNEY BARNETT from Melbourne Australia.  I put a live show and a great album below feel free to give it a listen, pretty great music.

NEXT: WHO NEEDS A CAR WITH A TRAIN AND A BIKE!
THANKS FOR READING
Jeff