I’ve never ridden with a pure tail wind, not from the side, but pushing me down the road. I met my first touring cyclist yesterday, german (with Ortlieb bags). I guess the route I’m on is prime for Germans who want to tour early in the year, this is the sunniest part of Portugal. I was going to ride the bus to the Algarves (southern coast) but the riding has been spectacular and I see no reason to ride the bus yet. I’m just 2 or 3 days away.
Yesterday I left Serpa on a very country road, it ended at the national park where it turned to gravel. The road was so step i had to brake and walk down, When I got to the bottom, there was this weird looking bridge 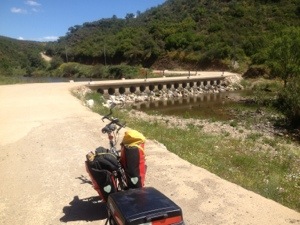 I sat and had lunch contemplating my walk up the other side. I threw some bread in the water to see if there were any fish, yep, lots. Then to my amazement a turtle about 25 centimeters surfaced. I reached for my camera, but it disappeared, it came back a little later too. I’ve never seen a turtle in a river before. After eating, it was a long step walk to the top, still a gravel road, that finally became paved again. Not much climbing once on the pavement.

It is perfect biking weather, I’m told the summers are unbearable. Kinda like riding Death Valley in the winter, NICE.